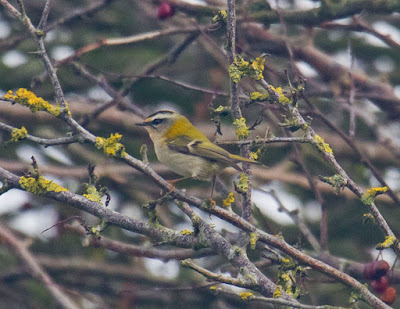 Appeared very quiet in the patch this morning with only singles of the following, Firecrest, Chiffchaff and Blackcap in longwood, Wheatear west beach, and Kingfisher bread lane. 2 Peregrine performing over the campsite made pleasant viewing, and finally 2 Stonechat on the eastern end of the  golf course. 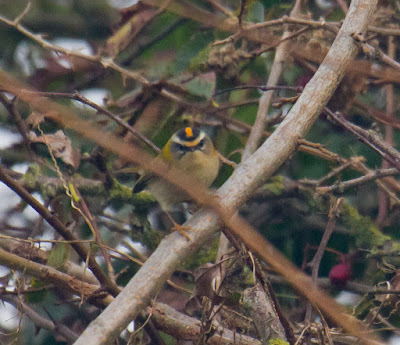 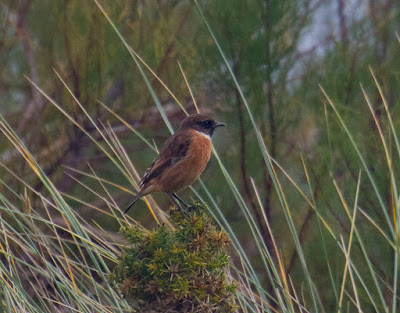 Good variety in the patch today, with combined totals from several observers being 1 Merlin Baliffscourt, 1 Short-eared Owl flushed from the sand dunes at west beach. 1 Woodcock flushed from behind the mill and flew across the golf course. Good number of Song Thrush and Blackbirds in the area. 1 Fieldfare, 2 flyover Crossbill calling, 3 Blackcap, 1 Chiffchaff, 10 Goldcrest,  4 Stonechat,1 Wheatear, and still good number of finches moving with at least 50 Redpoll. Also 5 Curlew and 5 Grey Partridge.
at 13:49

Congrats go to Richard Pulley for phoning me about a PALLAS'S WARBLER he found in the west end of Long Wood at 1610 this afternoon. Heard calling and associating with one of the three Firecrest in the wood Showed well but briefly a couple of times but not seen since 16:40. Also today a couple of both Chiffchaff and Blackcap, a total of 7-8 Firecrest in the Gap and about 8 Goldcrest. 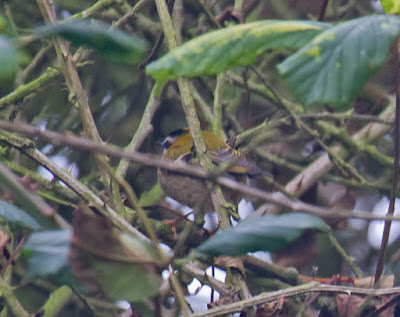 One of several Firecrest in Long Wood this afternoon
at 18:26 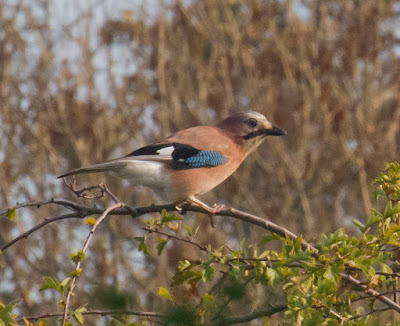 Out after the rain and was rewarded with at least 4 Firecrest in the patch this morning, with one at first wood and 3 behind the Mill Cottages. Good numbers Goldcrest with at least 10 in the area, 3 Chiffchaff, 2 female Blackcap, and 2 Peregrine sitting in the field north of the the Mill. 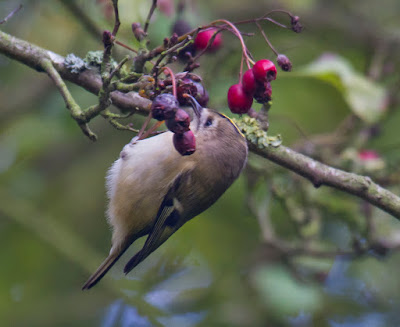 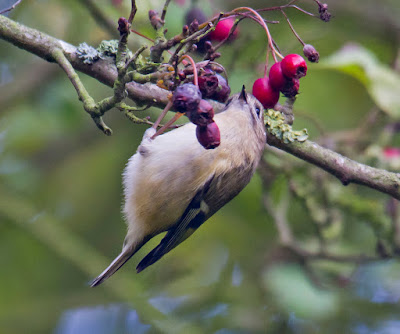 Late afternoon walk through first wood produced 1-2 Firecrest, my first of the autumn, singles of the following, Treecreeper, Blackcap, Little Egret and Sparrowhawk.
at 16:38

Good numbers of finches moving this morning mainly Siskin and Goldfinch, several Redpoll and 2 Brambling, although little else of interest. 1 female Bullfinch in the Atherington car park,  Merlin seen flying south from Climping beach.  Yesterday a Coal Tit was seen in the Atherington area.
at 12:53

It certainly felt like winter at Climping first this morning, but as the sunshine warmed thingsa a little it was apparent that just a few migrants were still around. A Male Brambling in a hedgerow showed nicely but briefly, 6 Swallows passed through as did a dozen Redpolls, 75 Siskins, and 130 Goldfinch, but otherwise only 2 Chiffchaffs, 3 Blackcaps, 4 Goldcrest, 3 Reed Buntings and a single Wheatear were noted. A Little Owl being mobbed by Blackbirds was also located and 29 Brent Geese passed west offshore.
at 19:35

At Climping Gap today a late WRYNECK  found on the vegetated shingle in fron of the dunes at West Beach at 1030. The morning being again dominated by easterly finch movement produced  1120 Goldfinch, 180 Siskin, 80 Redpoll, 60 Linnets, and  61 Pied/alba Wagtail. Back up birds included a Woodlark, 2 Fieldfare, 5 Wheatear, 3 Stonechat, 3 Blackcap. Offshore small numbers of Brent Geese and Wigeon moving west.

With the wind dropping and a hint of sun, anticipation of something promising at Climping beach this morning alas no, but  good numbers of Brent Geese today with a total of 447w, also 49w Wigeon, 4e Sandwich Tern, 4w Mediterranean Gull with two on the sea, 2w Red-breasted Mergansers, and 2 Shags. Good numbers of finches moving east in the still wind, with 320 Goldfinch, 150 Linnet, 18 Redpoll and at least1-2 Brambling heard over head, and  Goldcrest and Chiffchaffs more notable today. 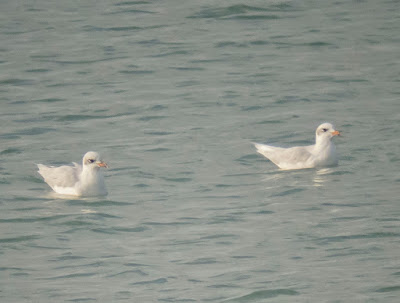 Unable to get out until late afternoon, I paid a visit to Marsh Farm.  At about 1620 walking down to the train lines, my attention was drawn to a single bird flying east, I immediately identified a GLOSSY IBIS flying towards ford railway station. The bird turned on it self and then was lost to view at this point.  Also on the main pool 60 Mute Swan, 13 Tufted Duck, 1 Gadwall, 50 Lapwing, around the bushes 1-2 Bullfinch, several Chiffchaff, and Yellowhammer, 2 Sparrowhawk and 1 Buzzard.

Good to get first firecrest of autumn on the patch, also kingfisher on golf course along with just one wheatear. Chiffchaffs still in good numbers with 40 recorded. Small groups of swallows, martins and a few sand martins noted. No big finch movements but roaming groups of linnet got near 100 mark. Five blackcaps and similar number of goldcrests and grey partridges were also seen. Skylark and meadow pipit numbers increasing. Further signs of the seasons changing were 20 brent geese flying west. Usual two peregrines ended a grey but mild morning.

Also lots of Blackbirds - 15 in one hedge in Bailiffscourt but not even a sniff of an ouzel
at 19:36

Very quiet in the patch at Climping Gap today. In two hours the sea produced nothing more than a single Eider E, a Golden Plover W along the shoreline, 32 Gannets, a few each of Med Gull, Great Crested Grebe, Common Scoter and auk sp, and 60 Swallows out SW and 2 Sand Martins. The bushes were useless except for about 10 Chiffchaffs, 3 Blackcaps and singles of Wheatear and Stonechat
at 19:46