Walk around the farm in the rain this morning with a good selection of wildfowl on the big pool, with 24 Wigeon, 8 Gadwall, 6 Tufted Duck, 4 Teal, also,1 Little Grebe, 1 Grey Heron, 12 Lapwing, 2 Cetti's Warbler, 6 Goldcrest,1 Buzzard, 1 Sparrowhawk and several each of Siskin, Yellowhammer and Reed Bunting.
at 15:38

In lovely bright cold morning talk a walk around the golf course and was lucky enough to flush a Short E Owl and a Dartford Warbler from the gorse.  Also 2 Blackcap 1st wood, 2 Goldcrest, 1 Stonechat, 12 Siskin moving east with small groups of Goldfinch, 1 Little Egret, 1 Sparrowhawk and still about 75 Linnet in the field north of the golf course. 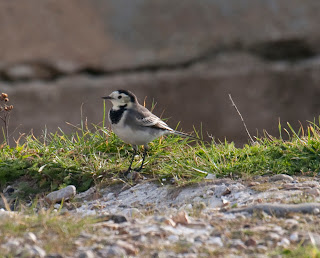 A slow stream of mostly Goldfinces continued through the morning, only a couple of Siskin heard overhead. About 18 Chiffchaff still in the area with 2 Blackcap, 3 Goldcrest, 3 Wheatear, 1 Redwing, 5 Mistle Thrush, 4 Grey Partridge, 3 Buzzard and a couple of Swallow.
at 13:14

A stroll around the farm this morning produced nothing out of the ordinary in a brisk  ENE breeze but a good selection of birds. 50 Lapwing, 8 Wigeon, 2 Gadwall, 2 Tufted Duck, 5 Yellowhammer, 1 Cetti's Warbler, 3 Reed Bunting, 5 Goldcrest, 1 Grey Wagtail, 10 Chiffchaff, 3 Blackcap 3 Jay, 1 Sparrowhawk and 15 Siskin.
at 18:50

A bit of variety this morning at Climping, the best being a brief Ring Ouzel, and a nice White Wagtail in the horse compound. The most obvious feature was the eastward movement of Goldfinch flocks; a total of 1200 streamed through in the first 3 hours, and at least 170 Siskins did likewise (many in mixed flocks). Other visible migration included at least 25 Pied/alba Wagtails, 2 Redpolls, 25 Skylarks, 100 Linnets and 120 Meadow Pipits. The bushes held 15 Chiffchaffs and 5 Blackcaps, and other sightings included 2 Sandwich Terns, a Kingfisher, 9 Grey Partridge and a single Golden Plover which dropped in to settle in a field
at 18:46

30/09/10  Another afternoon stroll around the patch produced 10 Wheatear 1 Garden Warbler, 2 Stonechat, 12 Chiffchaff 6 Blackcap. Reports from earlier in the day produced a Short E Owl near the mill, 1 Little Owl, 2 Spotted Flycatcher, more in number of both Blackcap, Chiffchaff  and 1Reed Warbler.


29/09/10  A bit of a late start at Climping after the rain, and things started slowly with just a few Chiffchaffs and 120 Meadow Pipits. Then I noticed the local crows having a go at a 'raptor' over Bailiffscourt - but a proper look showed it was in fact a Raven, a long overdue patch tick! The bird performed well for several minutes before moving off; then further bush-bashing proved unproductive, before too late I realised there was some movement taking place over the sea. Climping is often not the best sea-watching spot as stuff passing can be distant, however today most visible passage was taking place very close in. I managed to get in over 2 hours (until noon) when totals were: Wigeon 146W, Common Scoter 3E, Teal 3W, Curlew 3W, Whimbrel 1W, Brent Goose 300W, Arctic Skua 1E, Great Skua 1E, Black Tern 1, Commic Tern 2 and Sandwich Tern 4 . (Also a call from Paul Bowley saying he'd had a ringtail Hen Harrier here on Mon 27th).om
at 12:37
Newer Posts Older Posts Home
Subscribe to: Posts (Atom)