Quite this morning at Climping Beach with the highlight being a Slavonian Grebe moving west off Poole Place, several Med Gulls on the move east and at least two Chiffchaff around Atherington.
Red-throated Diver - 4E 5os
Diver sp 3E
Shoveler - 2W (PD)
Shelduck - 1 N
Common Scoter - 3 os
Med Gull - 33E 7W
Red-breasted Merganser - c.45 os
Great-crested Grebe - 8 os
Brent Geese - 1E, 1 in field
Cormorant - 9E
Oystercatcher - 7 on beach
Turnstone - 13W
Chiffchaff - 2
Pied Wagtail - 2
Jay - 1
Green Woodpecker - 1
Elmer Rocks records for 26th Feb 2021 (OM)
There was nothing really moving, but the flat calm sea enabled good viewing conditions for picking out what was offshore. A Slavonian Grebe was the highlight – albeit a fair way out – but also present were 55 Red-breasted Mergansers, with birds displaying amongst several of the flocks, plus a couple of Great Crested Grebes. Three Mute Swans were also on the sea, before flying west, then east, then settling offshore again, whilst Pintail featured again, with a flock of 4 east. Nine Oystercatchers were on the beach and 24 Turnstones and a single Ringed Plover were roosting on the rocks and finally a Chiffchaff was in the tamarisk hedge adjoining the beach.
at 16:03 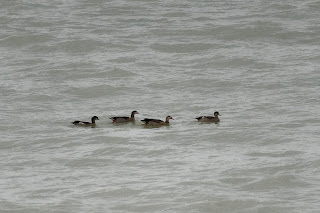 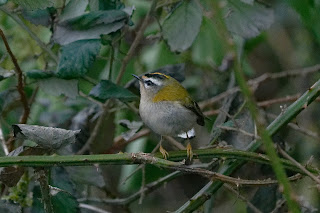 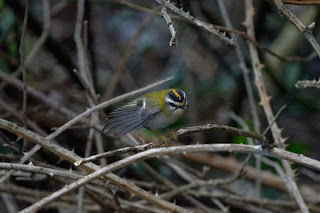 A check on the golf course, found just 2 Grey Partridge and a female Stonechat,  hundreds of Brent in the fields west of the Mill, constantly on the move because of the crow scarers, and  a Little Egret and 15 Lapwing north of long wood. Good numbers of Sanderling and Grey Plover on West Beach trying to avoid the dog walkers, 11 Song Thrush present around Kents, and hundreds of Gulls still present in the area.

With a bitterly cold wind chill didn't fancy the beach again so opted for a late morning visit to Marsh Farm. Plenty of Song Thrush around, and all the ponds still partially frozen. 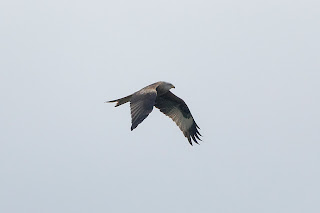 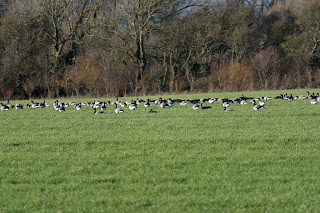