A report of 3 Whinchat in the rife by the old railway carriages and a Swift over today.
at 16:02

A brisk visit to the patch, found the Ring Ouzel still present in the back lawn of Kents Farm Cottage, viewed from the private road leading down towards the seafront. Favouring the western edge of the garden looking over the pond. A Little Owl around  Bailiffscourt, also 2 Treecreeper there and a White Wagtail on the back lawn. Quick look offshore produced a couple of Whimbrel and Sandwich Tern, and a single Shelduck west and Great-crested Grebe on the sea. 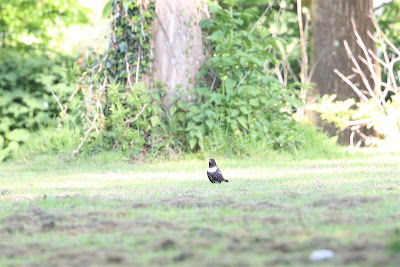 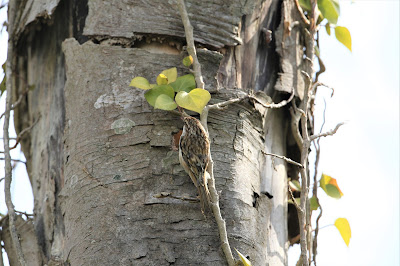 Very quiet in the patch this morning in a cold northerly wind, with just 5 Whimbrel on and around the golf course, 20 or so Med Gull calling overhead and the usual assortment of Warblers heard although present in smaller numbers. 5 Wheatear in the back fields, 2 Stonechat and a Coot still present. A smart looking male Ring Ouzel in the back garden of Kents Farm House, was the clear highlight of the morning. This is accessed from the private road east of Climping. Also 2 Mistle, 3 Song Thrush and 9 Blackbirds there.

A quick visit to the patch paid dividends with a singing Nightingale seen and heard from the back of the golf course.

A couple of personal firsts of the year from Marsh Farm with 3 House Martin  over the big pool with several Swallow's, and a nice Whinchat. Good numbers of a variety of Warblers in full song, with at least 6 Cetti's present. 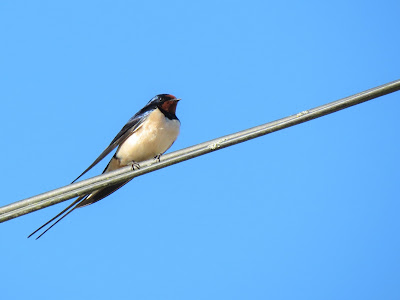 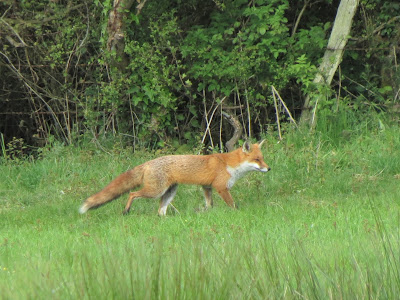 A seawatch from 06:45 didn't produce the required totals.

Four Great Skua off Climping Beach late afternoon was the highlight of today, missing the other species of Skua seen at other locations. Med Gulls on the move throughout the day, small numbers of Whimbrel, a couple of Fulmar and distant Scoter. Gannets and Sandwich Tern in much smaller numbers.

A pair  Coal Tit seen again again around the hotel grounds this morning, the usual array of Warblers present with just a single Wheatear.

Another fine bright morning with a northerly breeze produced more than expected in terms of variety. The Golf Course turning up a few firsts for the year with good numbers of Wheatear present along with a single Whimbrel.

A tad warmer than yesterday morning.

A nice bright morning with a brisk northerly wind found me around the Golf Course, which provided a couple of first's for the year, combined total's below.

This morning a Grasshopper Warbler seen and heard at the end of the Mill Path (PB) Double figures of  Wheatear, Whiethroat and good numbers of Willow Warbler in the area. The Cetti's Warbler heard again from the back of the golf course and a Sedge Warbler there along with 3 Sparrowhawk and 3 Grey Partridge. 2 Coal Tit showed well again around the Hotel grounds. Offshore very quite again although a few Med Gull moving through, singles of Whimbrel, Canada Goose and five Great-crested Grebe on the sea, and Ringed Plover along the beach.

Combined highlights's from this morning showing a little variety

My first Acro's of the year, other than that generally very quiet.

Been having that feeling that Spring this year is passing me by, a conversation with (RP) mid morning seem to confirm that, his account below.

Well a dull chilly day suddenly brightened up just as I was looking forward to a cup of coffee. At just about ten this morning I was on the river footpath just opposite the entrance to Littlehampton golf club. Suddenly I became aware of a bird above me. For a tenth of a second I thought it might be a Hobby as it appeared largish, dark and with scythed shaped wings. I realised it was not because shape size and colour were all wrong. As it flew north up river I could see that it was a very large swift with long dark wings and a strikingly large white underside. It was too big to be an aberrant swift and looked nothing like a House Martin. Throat patch was in distinct. As it turned south above the golf club house I noticed another large bird appear from the north east. This bird was a peregrine that immediately began to harass the Alpine Swift. The swift moving fast headed south down river towards the sea. It geared towards the east as the peregrine per sued it. Sadly both were very quickly lost to sight as they were both moving at some speed. News tweeted as soon as birds disappeared.
Was it an Alpine Swift? Yes it was!

A Chilly start to a bright day. Nothing special around, but a slight increase in migrant numbers.

A cracking male Redstart in the horse paddock this morning and Wheatear numbers into double figures for the first time this Spring.

An hour sea watch from Climping Beach at 08-00 in a fine bright morning with a nice south easterly breeze. Combined total's below

Saturday 8th April - A Tawny Owl heard from the back of the golf course, the first Reed Warbler of the year in the area along with a Coot. 2 Red-throated Diver flying east close inshore and 6 Grey Plover, in a fairly disappointing day.

A Tawny Owl heard  and a Coot being the oddities in the patch this morning,  along with 10 Chiffchaff, 8 Blackcap, 6 Willow Warbler, also singles of Cetti's Warbler, Swallow, and Stonechat. Offshore Sandwich Tern and Med Gull's on the move. Yesterday Thursday the 6th, the first Whitethroat seen around the golf course and a grey goose flew west.
at 19:50

A bit more lively in the patch this morning with good numbers of Willow Warbler in song and a couple of species of Hirundine putting in an appearance. Combined totals below.

A fine bright morning before the sea mist moved through produced the first Sedge Warbler from the back of the golf course, and a Swallow through. Proceedings took a turn for the worst despite good coverage producing just 4 Reed Bunting, several of both Chiffchaff and Blackcap in each wooded area, 2 Grey Partridge and a Little Egret. Offshore, 2 Great-crested Grebe, 7 Sandwich Tern east and 11 Oystercatcher.

A Jack Snipe flushed from the golf course this morning, also 3 Wheatear in the area and the first Swallow through.
at 14:48

Not a great deal happening again in promising conditions. A Red Kite drifted over the patch,  supported singletons included Peregrine, Firecrest, Cetti's Warbler, and Wheatear, along with  9  Chiffchaff and 6 Blackcap.
at 14:46
Newer Posts Older Posts Home
Subscribe to: Posts (Atom)