Varanger & Pasvik Forest 18th - 26th June
A return to Norway was always on the cards after my last disastrous visit, so when a friend mentioned he  was thinking of Varanger I said straight away I was in. We flew with SAS on the 18th June Heathrow to Oslo, with a 4 hour stop over, before arriving at Kirkness. A lot of people hire there car in Finland as this can be a cheaper option and then drive up to Varanger,  we decided as time was of the essence we would fly as far north as possible .

Day One
So picking up the horrendously expensive hire car, a 1200cc VW 4 door petrol saloon, we were on are way. We were staying in a small town near Vadso called Vestre Jakobselv just off the main  E75 road. The site  provided small self catering wooden cabins, very warm and comfy and the owners estimated a two hour drive from the airport. Baz started the driving spotting plenty of Fieldfare, Redwing, Bean Geese, and Reindeer along the way, and after about half an hour spotted a Moose close by the road side in a field.
Onwards, and after about 10 minutes another sharp stop, lucky no one behind us, the roads are pretty quiet especially at that time of night, he explained that he had seen a bird flying in the distance which appeared to land. After reversing and scanning the horizon we picked up the bird which turned out to be a Hawk Owl sitting on a high elevation point, about 30 minutes from the airport, what a great start. Around the eastern side of the fjord we saw several Rough legged Buzzards, Whopper Swans  a Artic Fox and several Reindeer.
On entering the western side the Fjord the landscape changed, 3 Little Stint on the mud flats around Skallelv, was a nice surprise as was White-tailed Sea Eagle and Short-Eared Owls, Wheatear and Spotted Redshank. 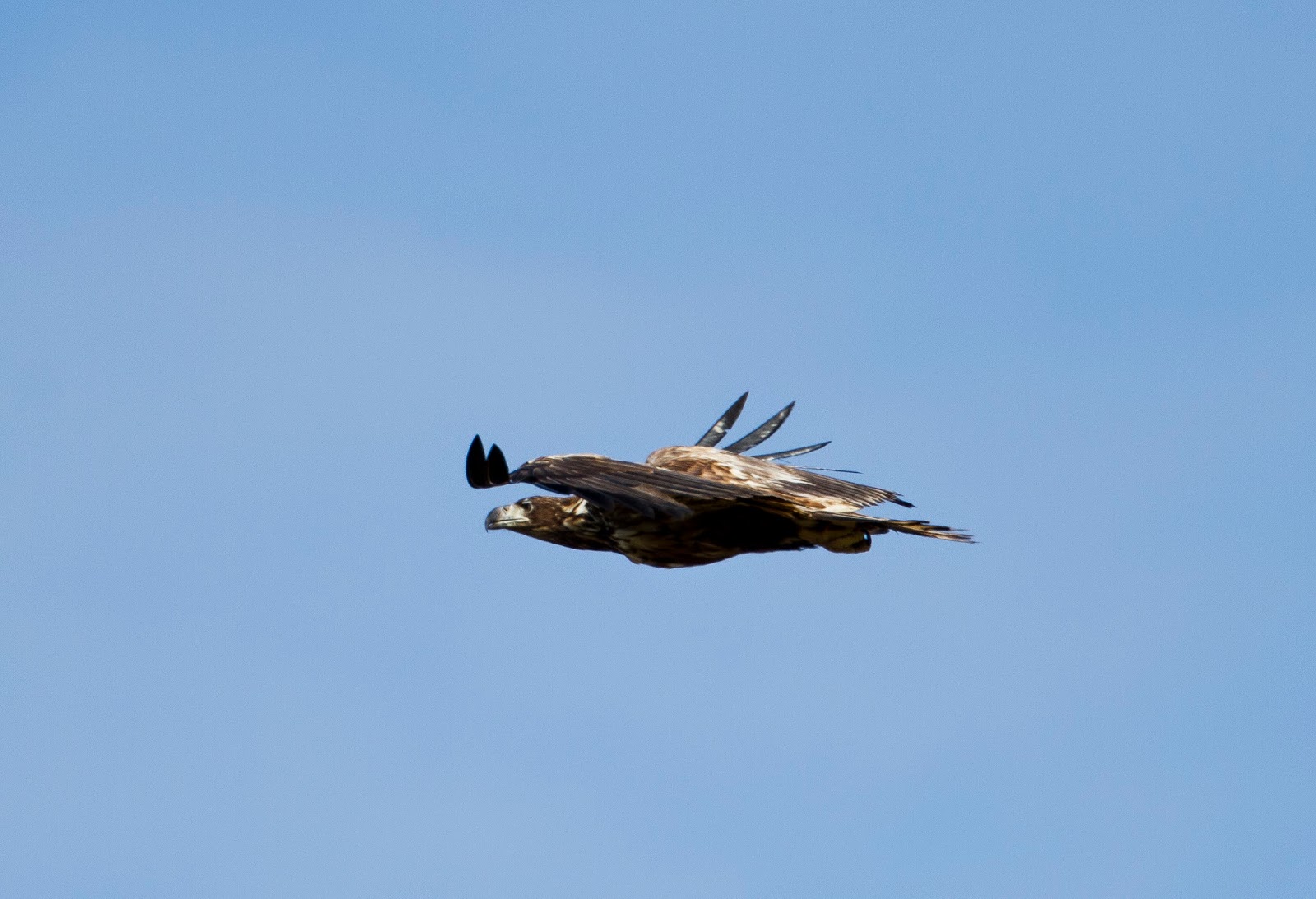 Eventually arriving at the camp site some four hours later we spent the night birding as no one was up and available to let us in the cabin. Day light hours at this time of year are excellent so that was not a problem, birding 24hrs a day and then trying to sleep whilst its light is. Plenty feeders around the camp site grounds producing a variety of  finches and Willow Tit.

We returned to the camp site at midday, quickly checking in and dumping off the gear,  a good sized cabin that could have easily slept 6, 2 showers and kitchen with all the latest mod cons, we even watched some of the World Cup football on the Sky channel. It later transpired we got a free upgrade due to the camp site being fully booked. We made the short journey from the camp site into Vadso,  the harbour is on the right hand side as you drive into town, we parked  the car and scanned for the previously reported female Steller's Eider but was rewarded with a drake and 2 females, with several Goosander and Common Eider present. 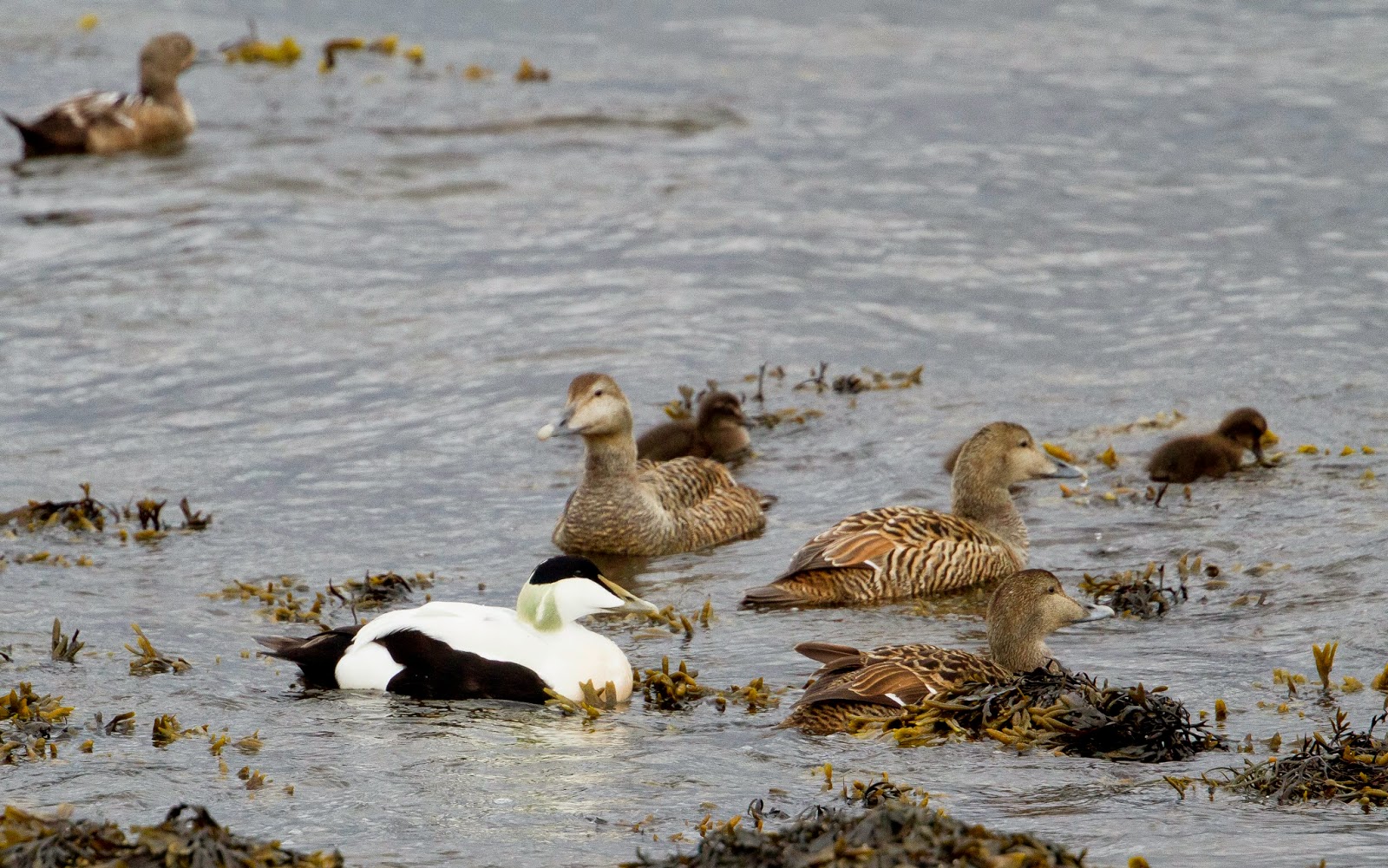 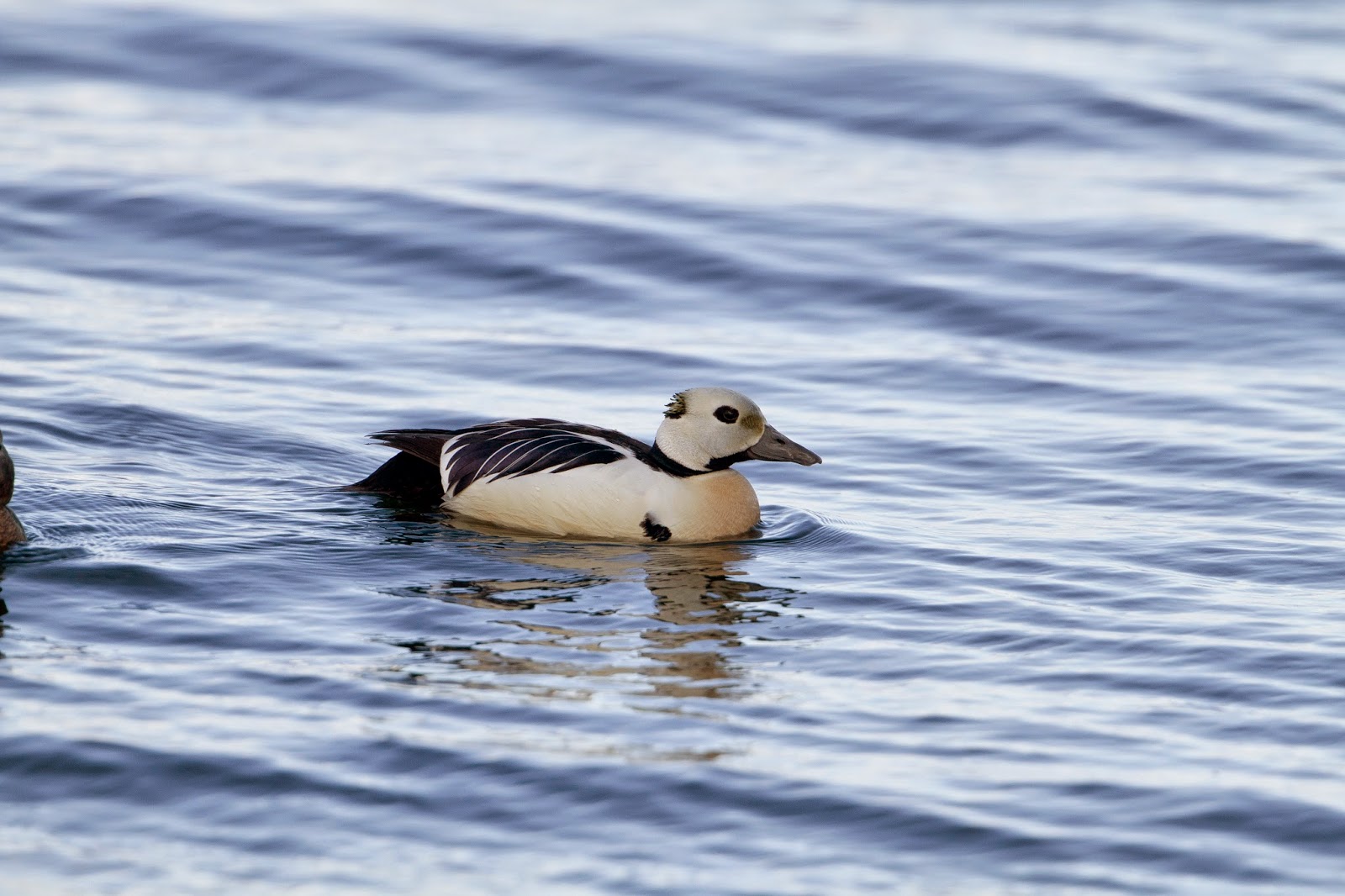 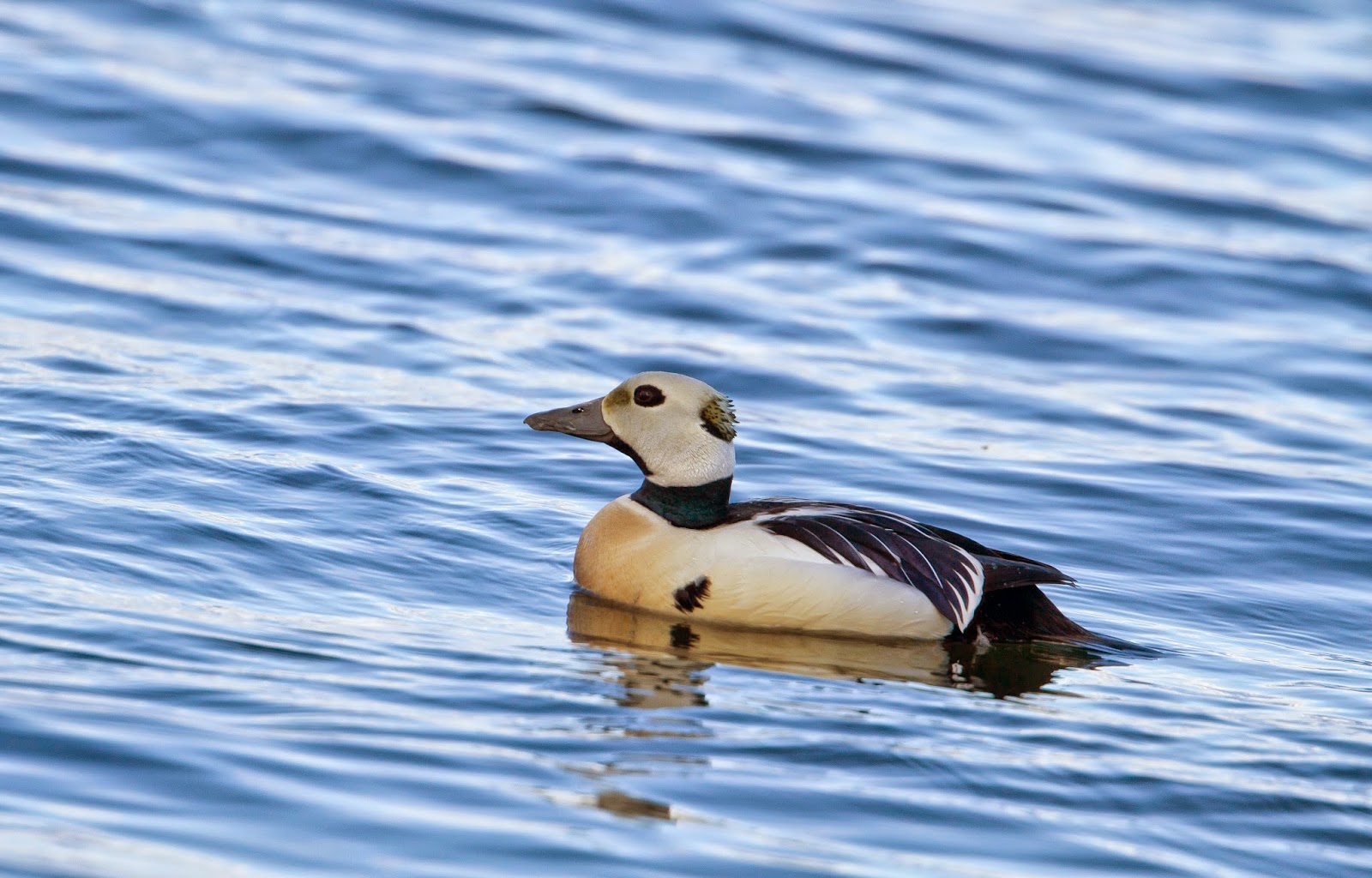 After spending a couple of hours watching the Steller's we continued on the E75 to Ekkeroy which contained a large Kittiwake colony along with several Guillemot, breeding Artic Tern and Skua along the beach and Long-Tailed Duck offshore. Have to say some of the habitat and views are absorbing, really great landscapes. 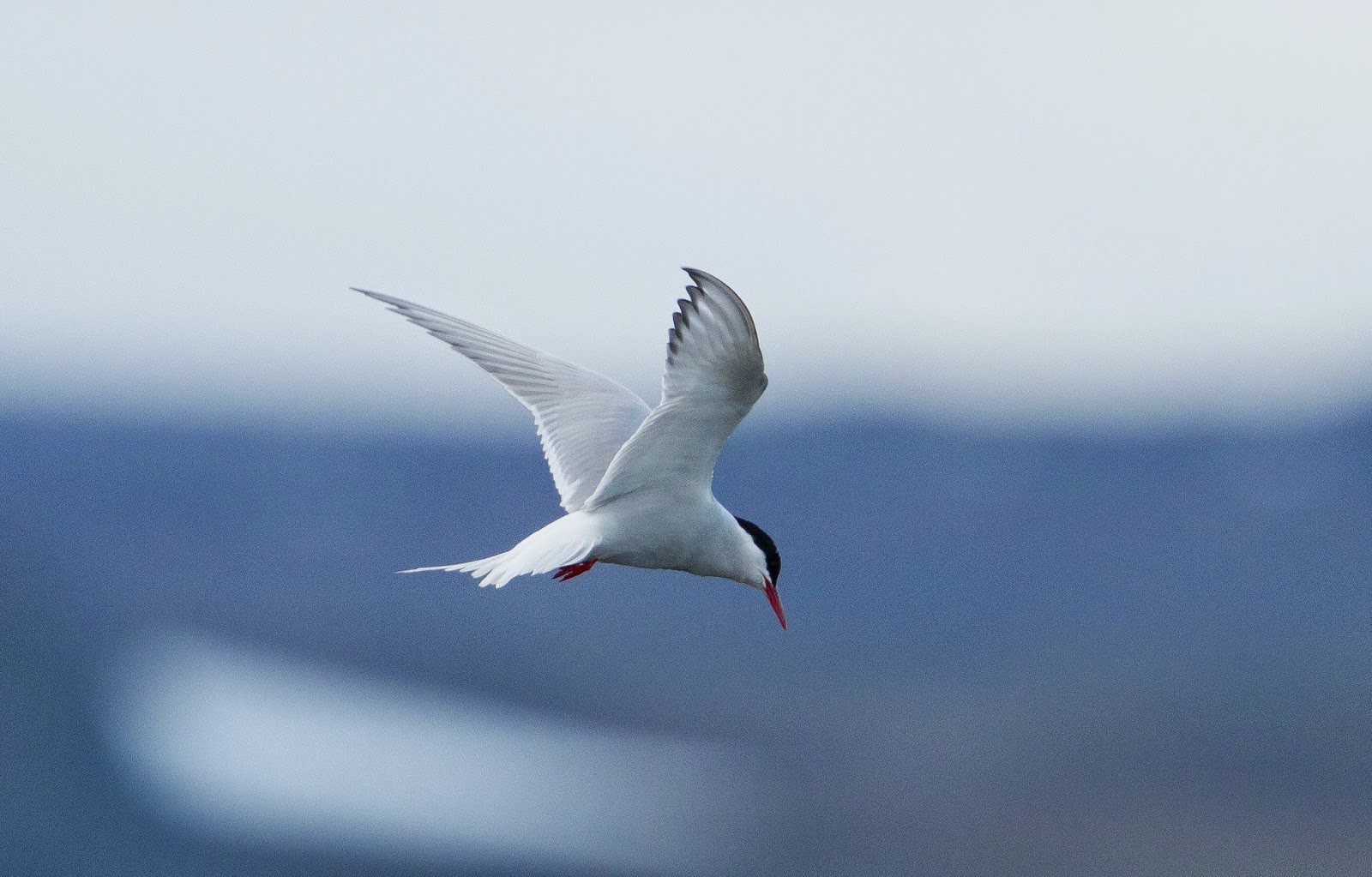 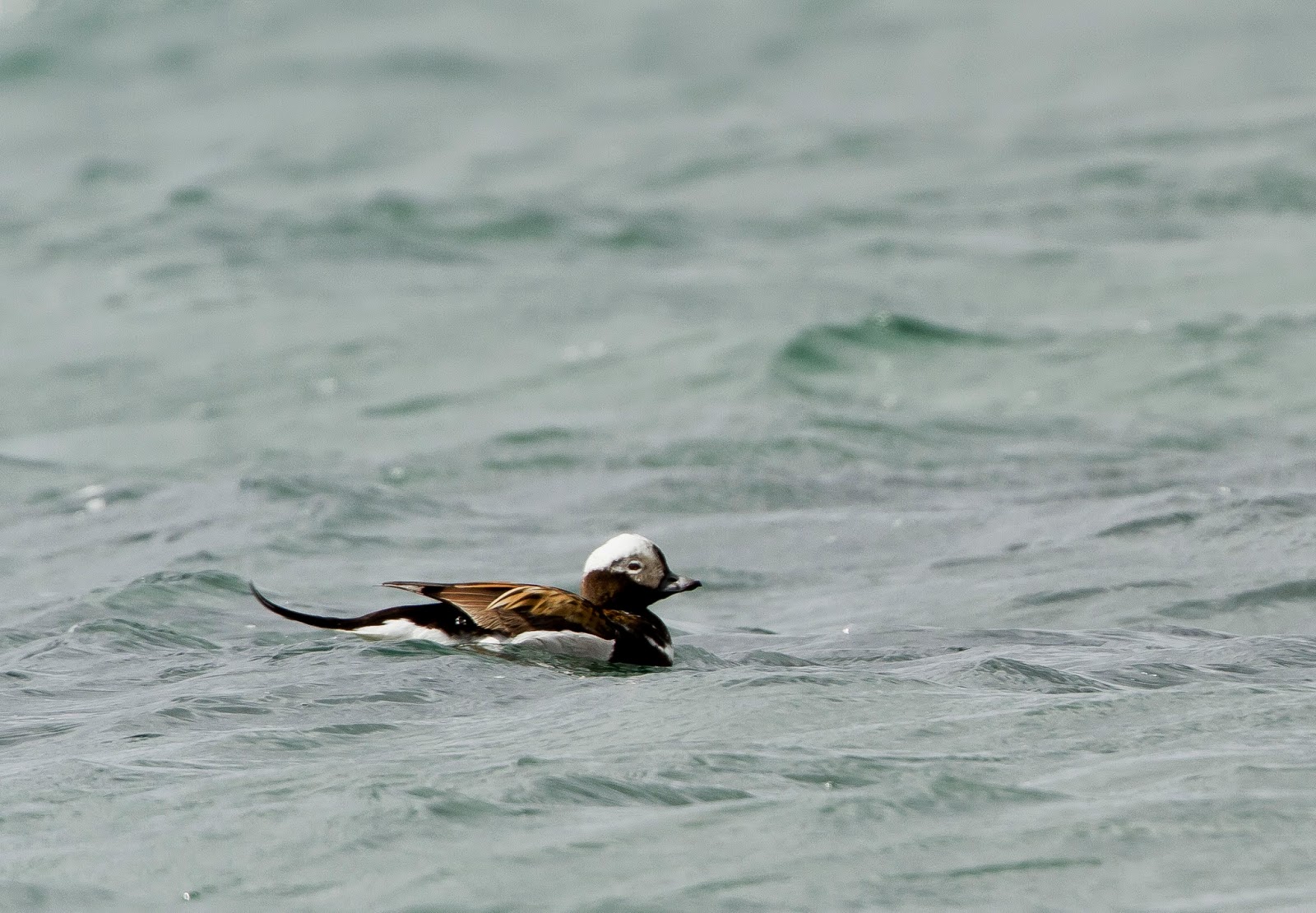 We Spent the afternoon birding around the beach at Vestre Jakobselv and Vasdo harbour, finding nesting Artic Skua, we popped into the Birders Basecamp Hotel for a Coffee, the owners are birders and it is the only regular place to meet other Birders and get some current information. Here we heard of a long staying Harlequin Duck at a place called Hanningberg, seen for the last week or so by a bridge there, that would be the target for the next day. 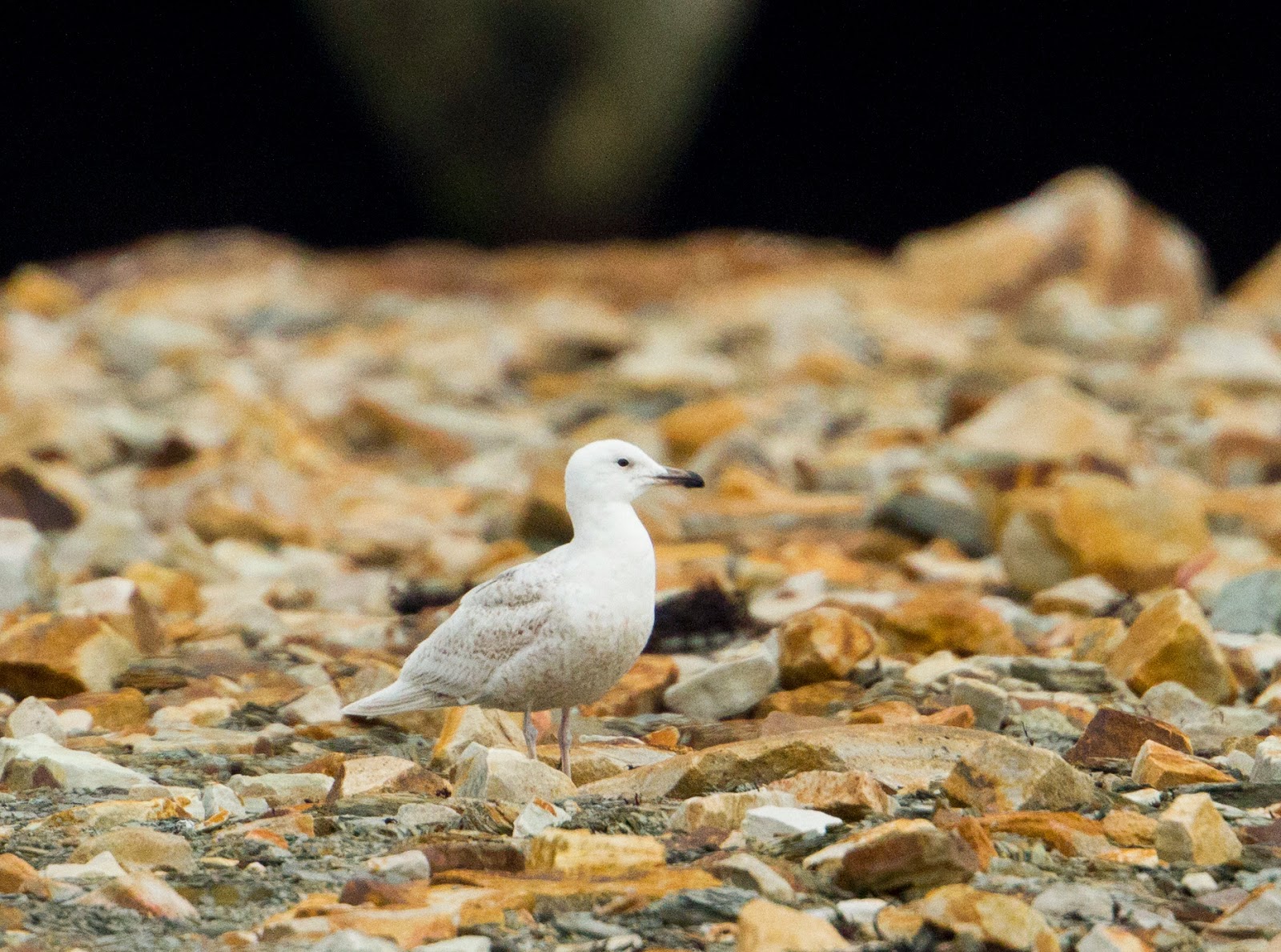 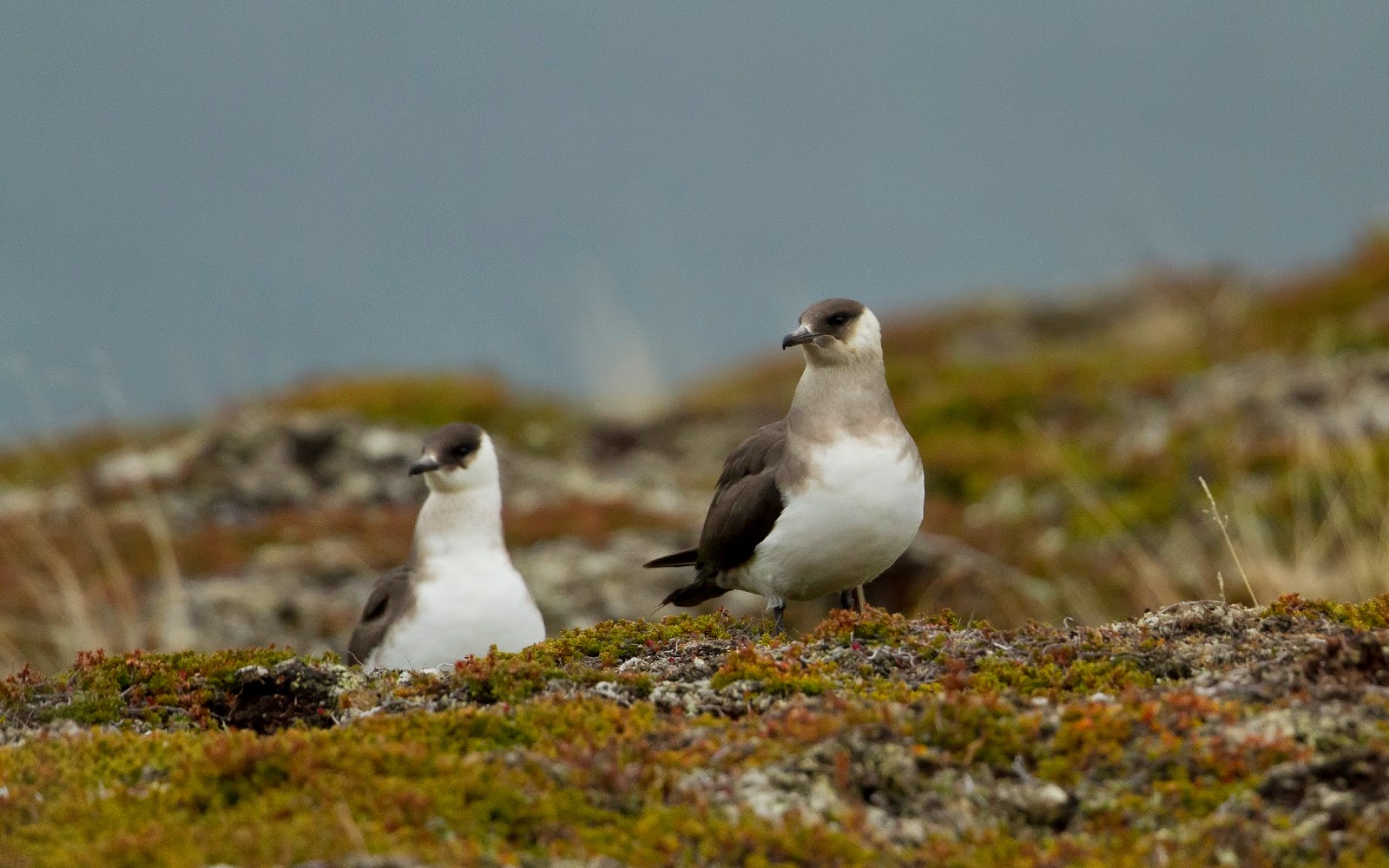 Day Two
Early start the next morning off to Hamningberg, the the town is about 3 hours drive from our Vestre camp site for the previously reported Harlequin Duck at Sandfjord bridge. Took us twice as long to reach the said location with our repeated stops and of course we dipped. The bird was not reportedly seen again.  Would have to say that this was my least favoured part of the area, very desolate and remote, did find a number of good birds along the way though.

Day Three
The town of Berlvag, which is probably around 400km further north is a great area, producing a vast variety of species along the way. Absolutely tremendous area, so many changes of habitats along the way provided ample stoppages, highlights being Willow Grouse,  Long-Tailed Skua and Temminck's Stint. 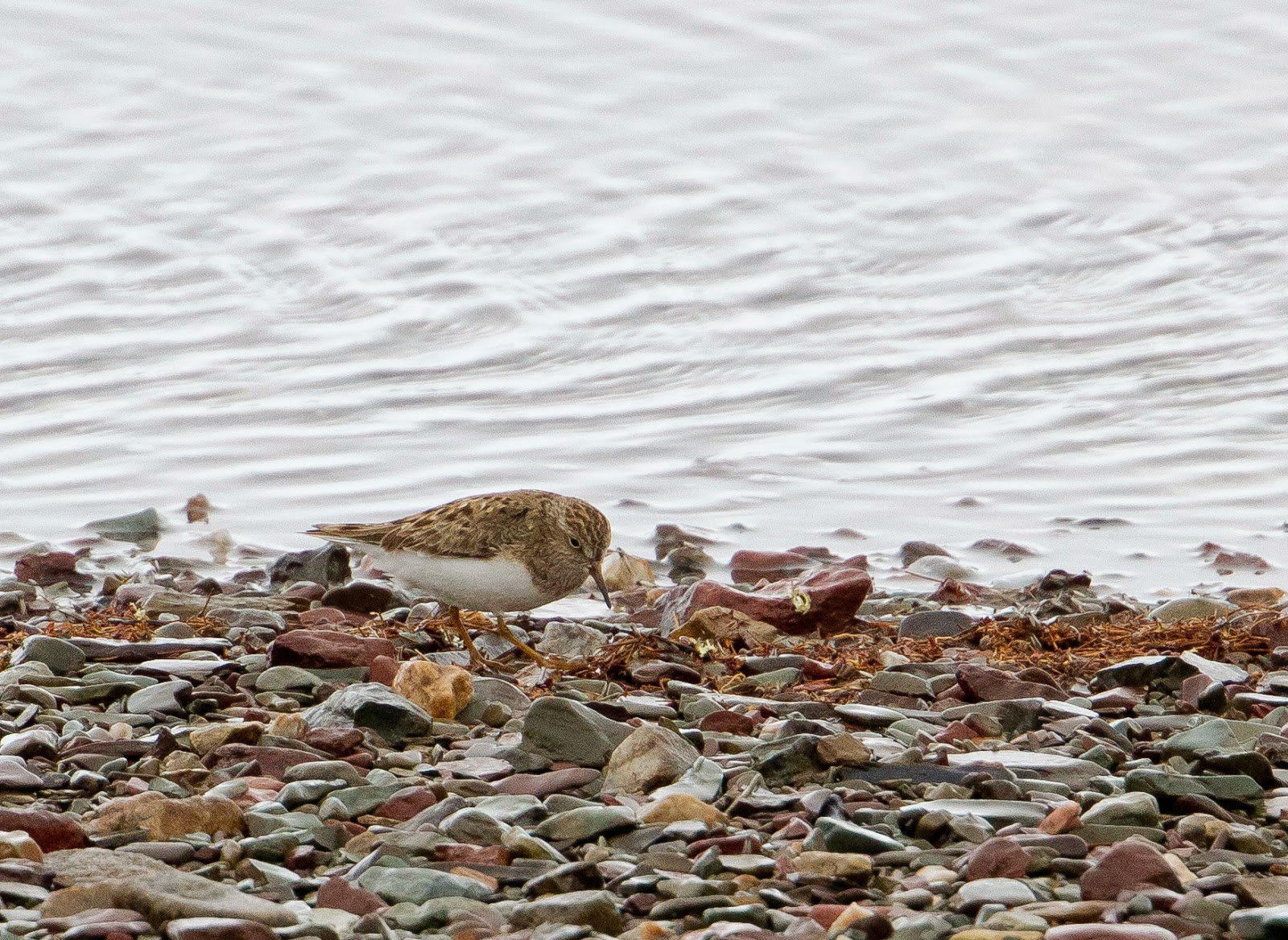 Berlvag is a small fishing town were King Eider are often reported, also several reports on Twitter about a long staying Ross's Gull, that was enough reason for the visit. As we approached the town we met a a Finish Birder, who had made a six hour journey to see the bird and confirmed that the Ross's Gull was seen at Storlev Delta the previous day.  A few hours wait and recce of the town before the dip streak was crushed. 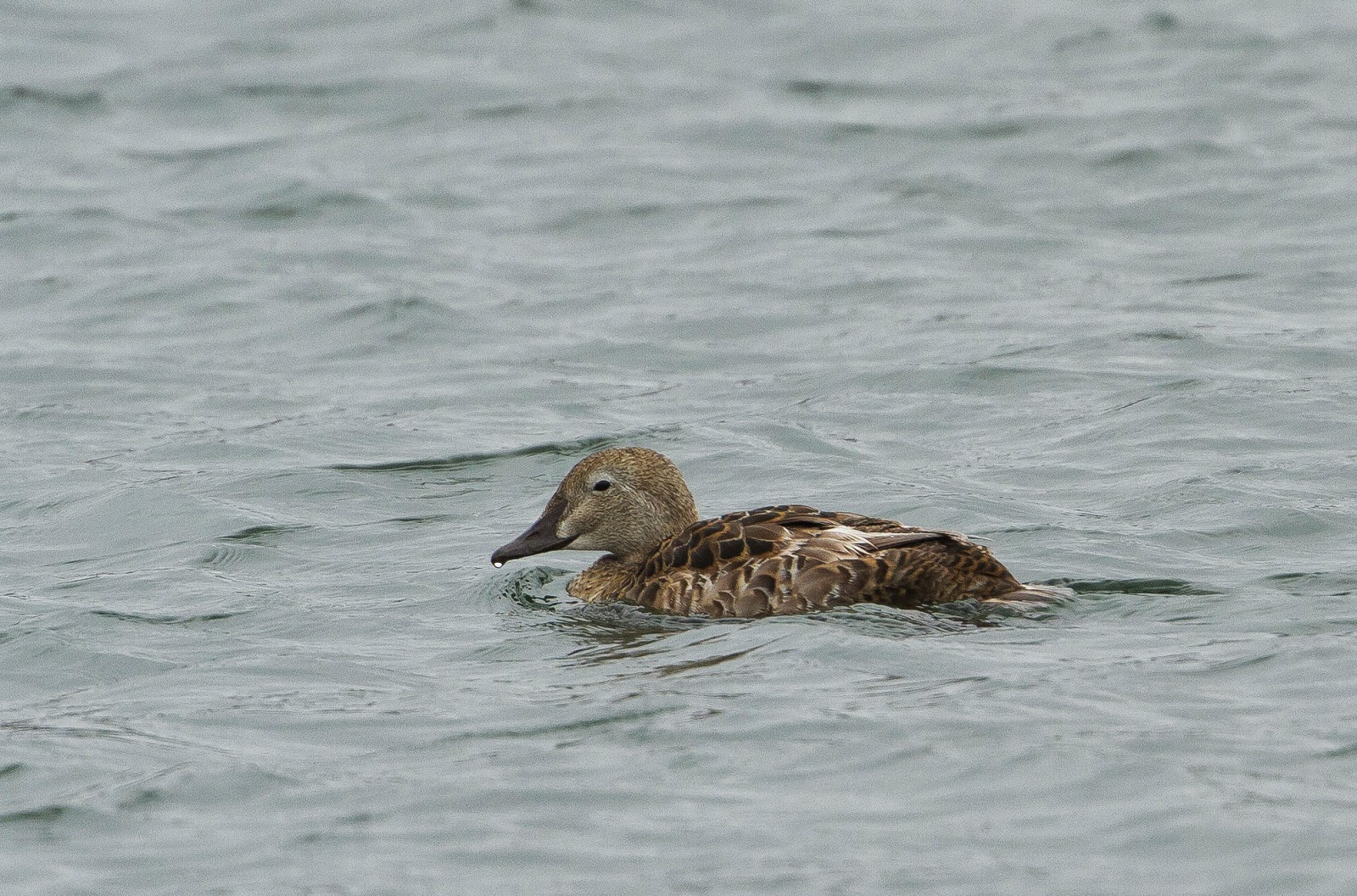 Seawatch from the Light house was phenomenal about 5 km from Berlevag and produced a Humpback Whale, several Bruinnich's and Black Guillemot vast numbers of Blue Fulmar, with padders such as Puffin, Velvet Scooter, thousand of Kittiwakes and Artic Tern. The return journey back to the camp site added several species to the trip total. Not having to worry about time with the area producing almost 24hr daylight hours. 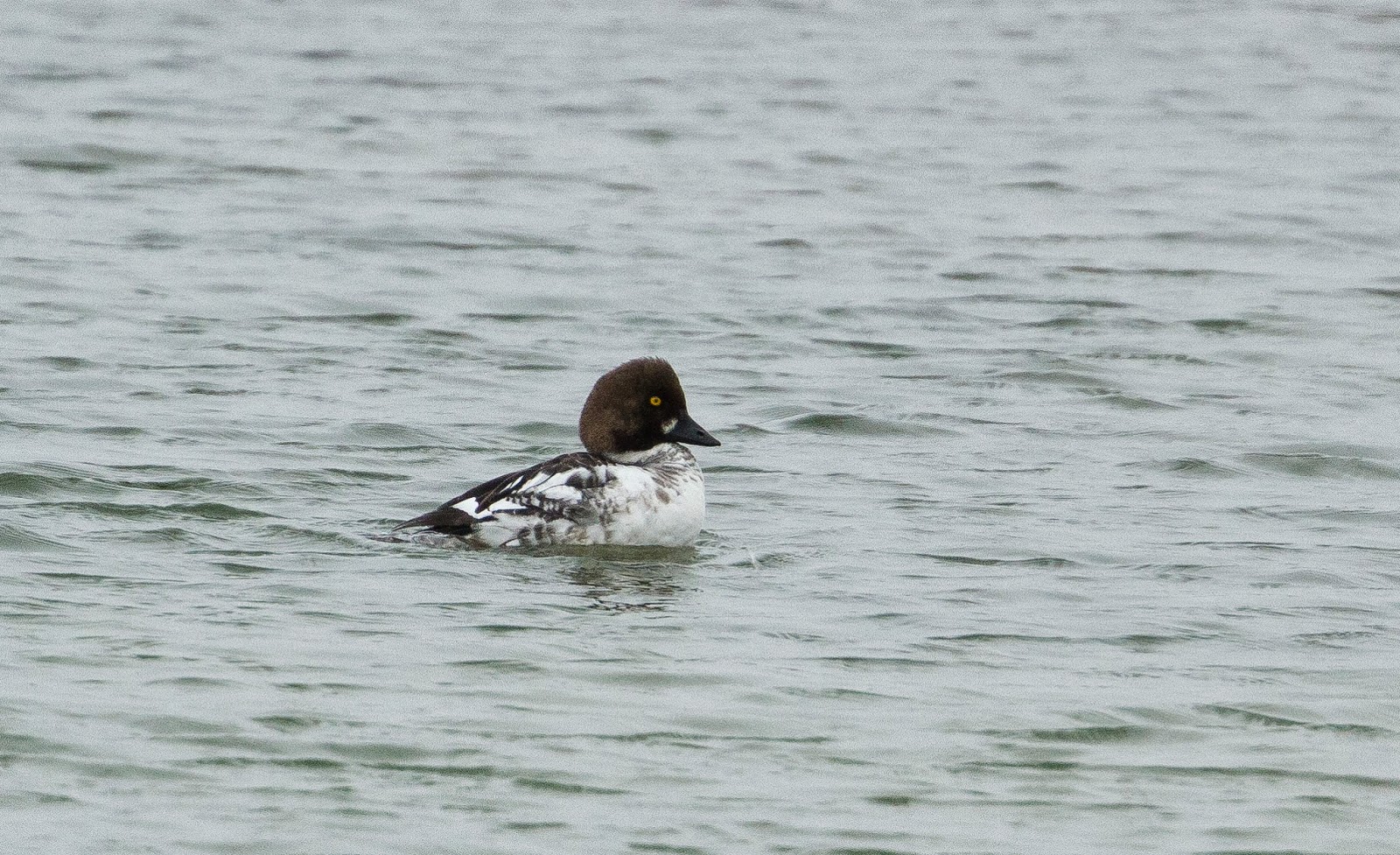 Day Four
At Berlevag we heard news of breeding Gyr Falcon from some Finish birders, no exact details but they said the nest could be seen from the road. After slowly driving the road  we came across what looked like the location. What a massive nest it was and after a couple of hours wait the parent flew in with provisions for the two chicks.


On the return back to the camp site we stopped off at Komagvaer Beach for a reported White-Rumped Sandpiper, dipped again but found several things to soften the blow.


The other side of the road held breeding Ruff, Sedge Warbler Lapland Bunting and Red-throated Pipit. 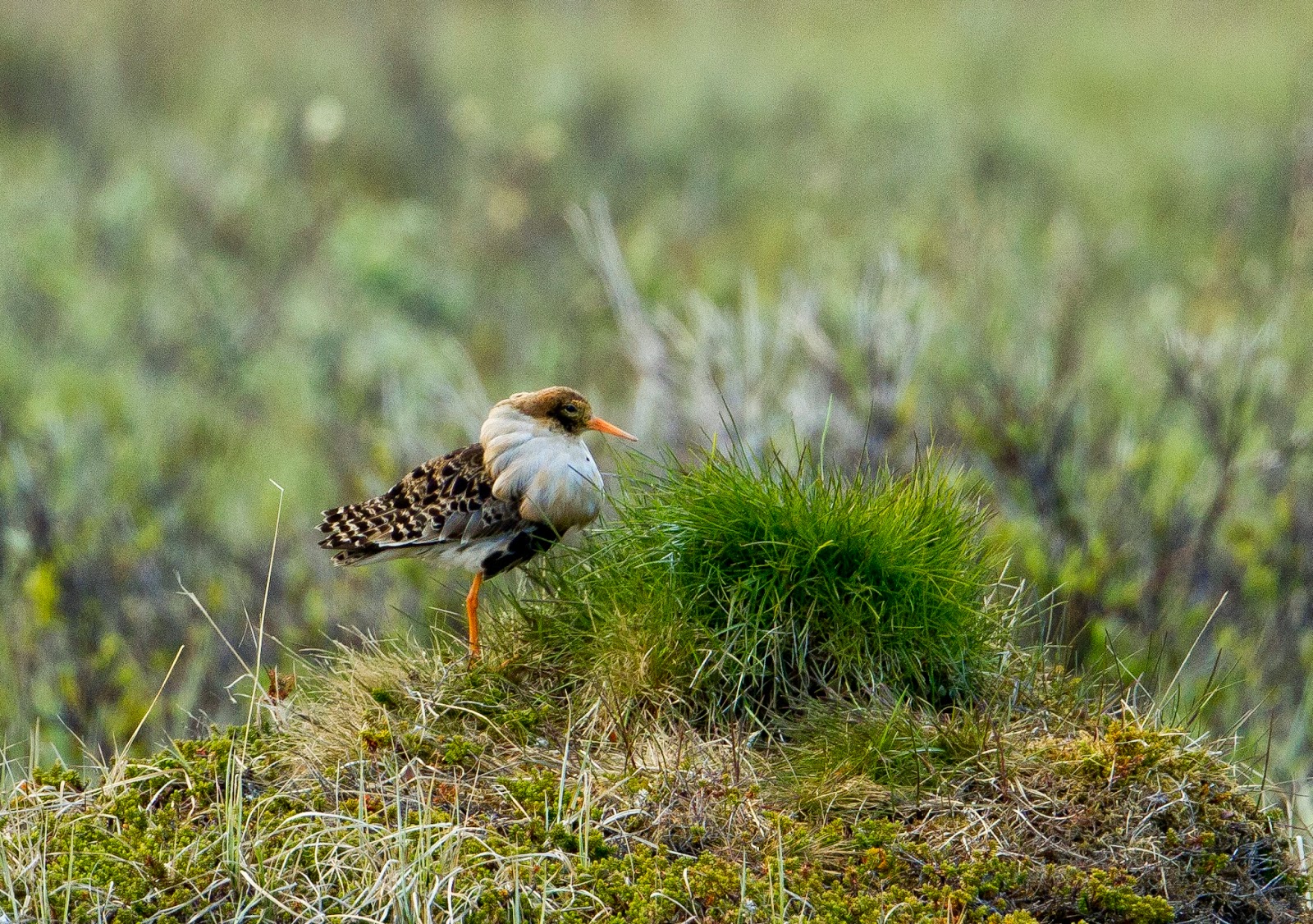 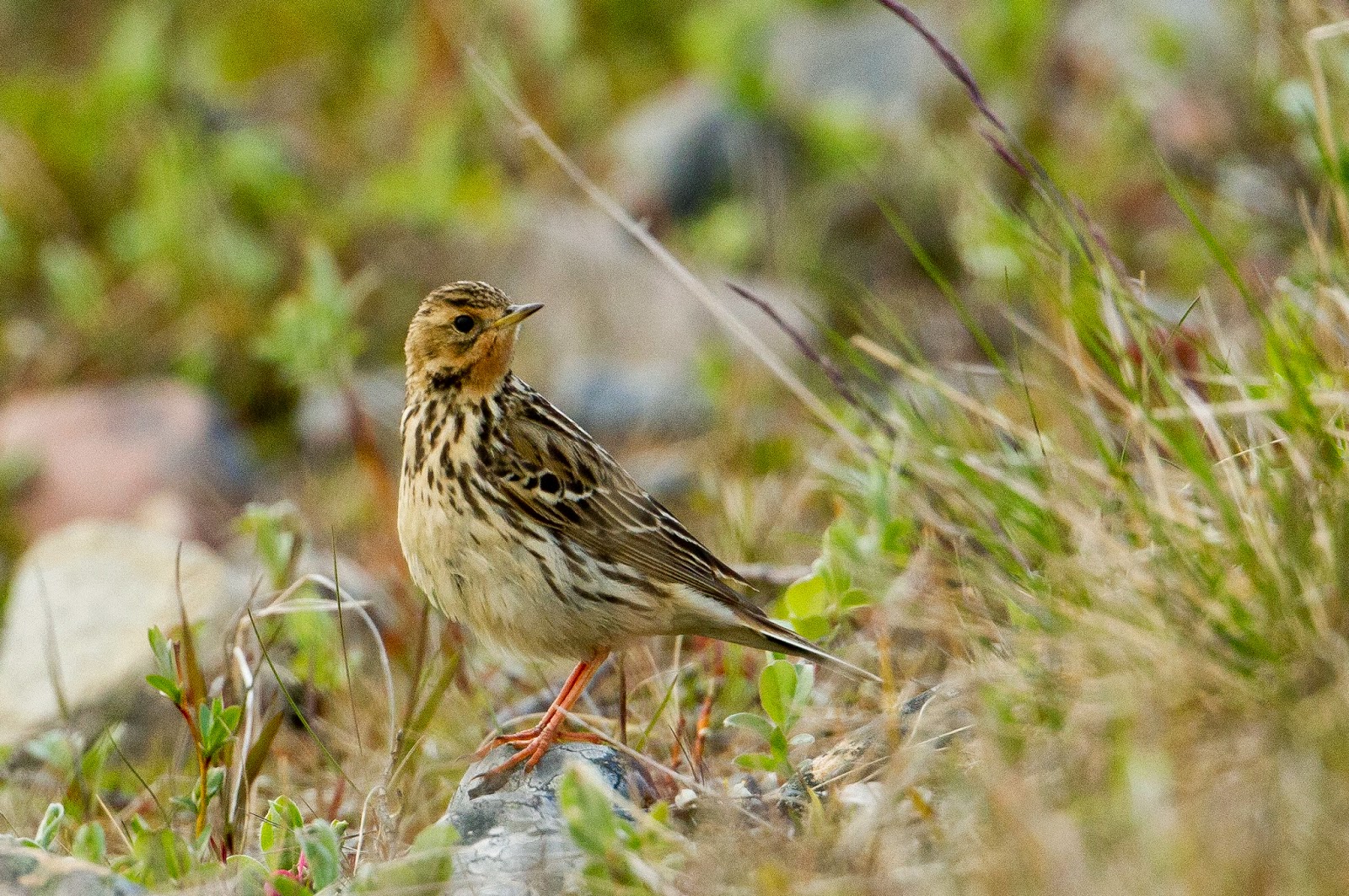 Day Five
After five days birding around the Varangerfjord, a change of habitat and onto the Forest was on the agenda. The route up to Pasvik would take back past Kirkness Airport on the E6. Photographic opportunities aplenty just takes twice as long to get anywhere. 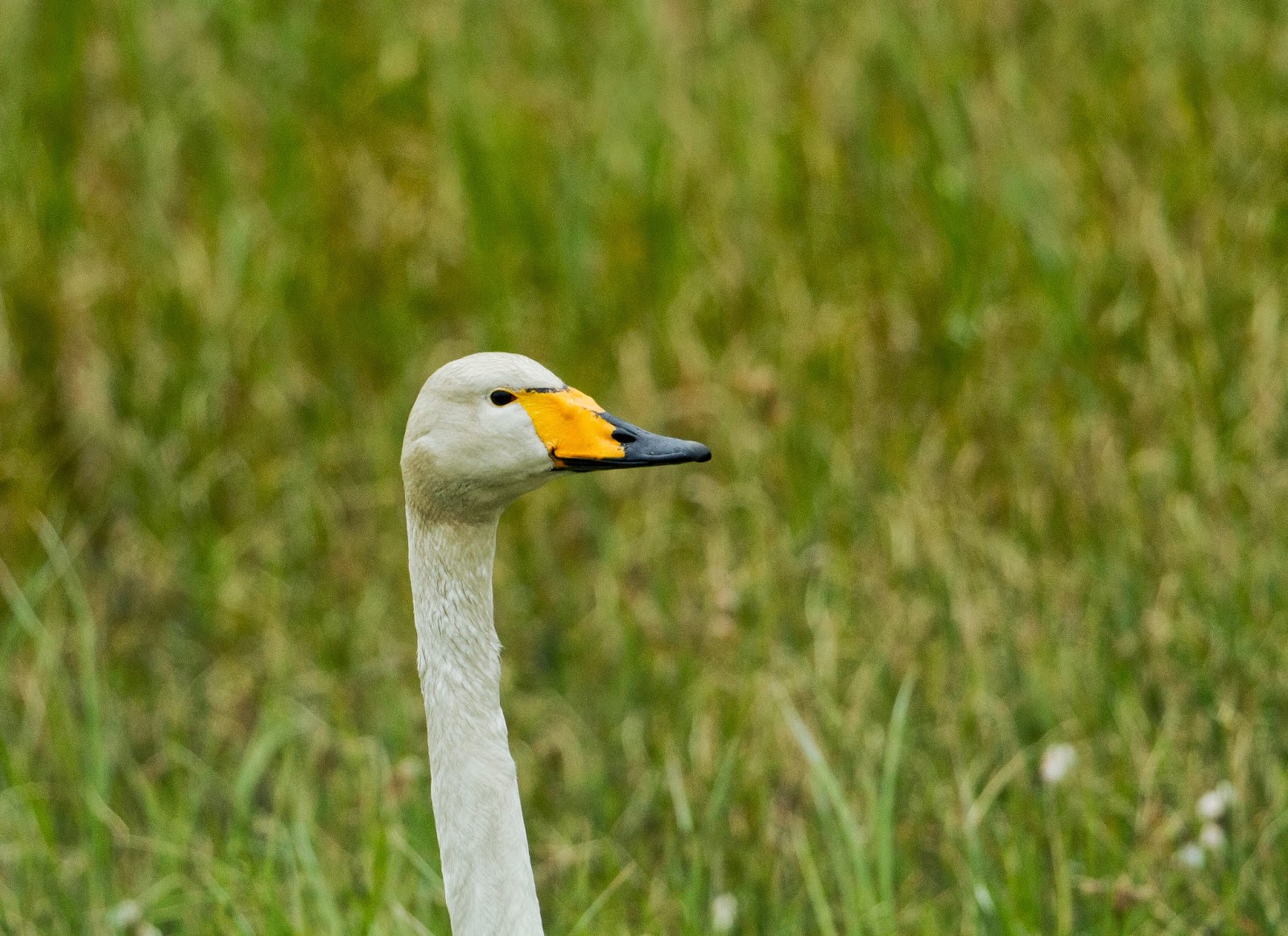 Bumped into an old friend sitting on a telegraph wire on the journey to Pasvik near kirkness Airport, this time had excellent prolonged views. Three birds present, two adults and a juvenile, one of the adults had missing tail feathers. 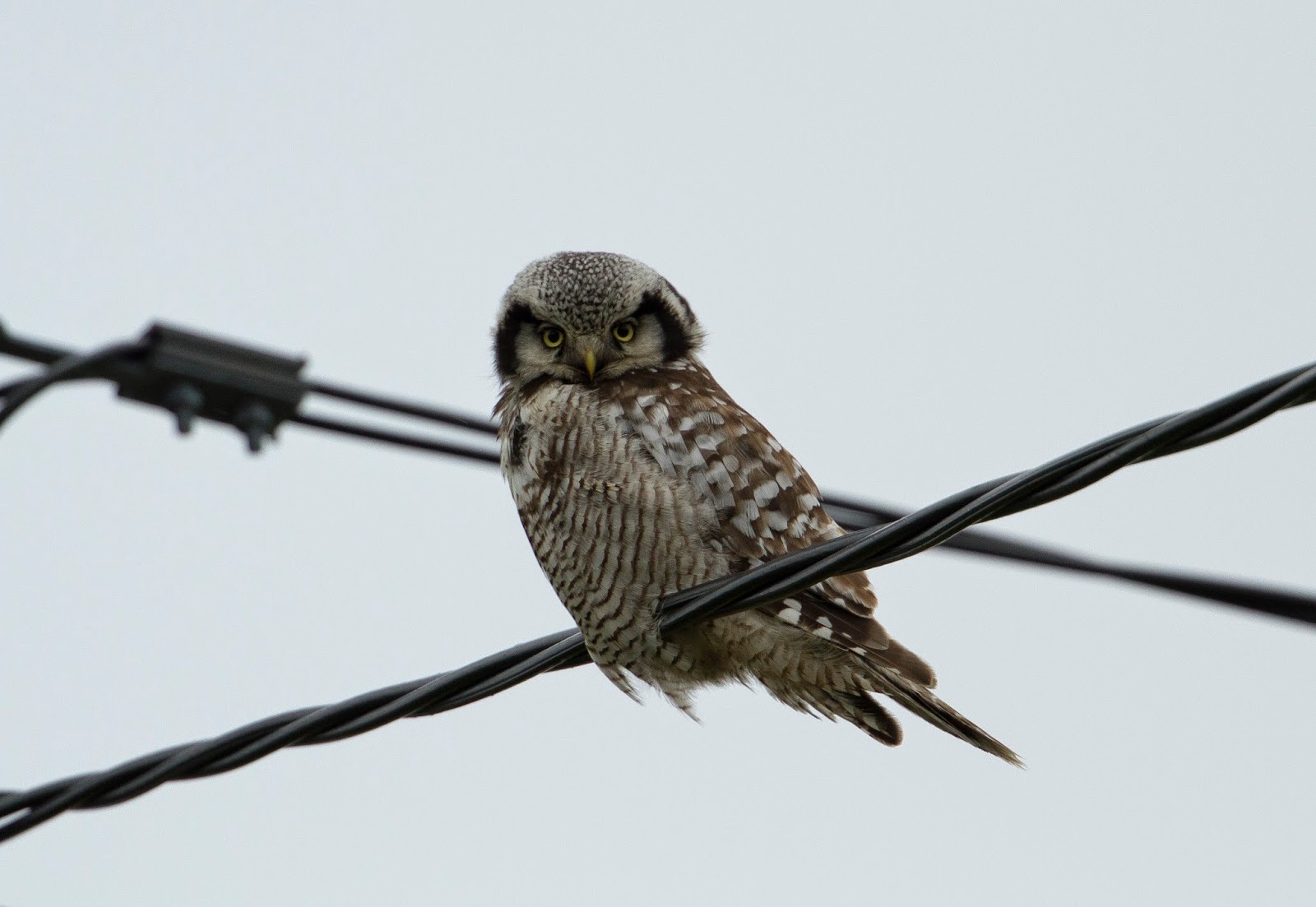 Continued are journey onto Ovre Pasvik Camp site in the Pasvik forest area. Example below of the style of cabins one can expect at the site. Shared shower room ,washing facilities and toilets if you didn't fancy the outhouse, ideal for cooking something hot after a long day in the field. 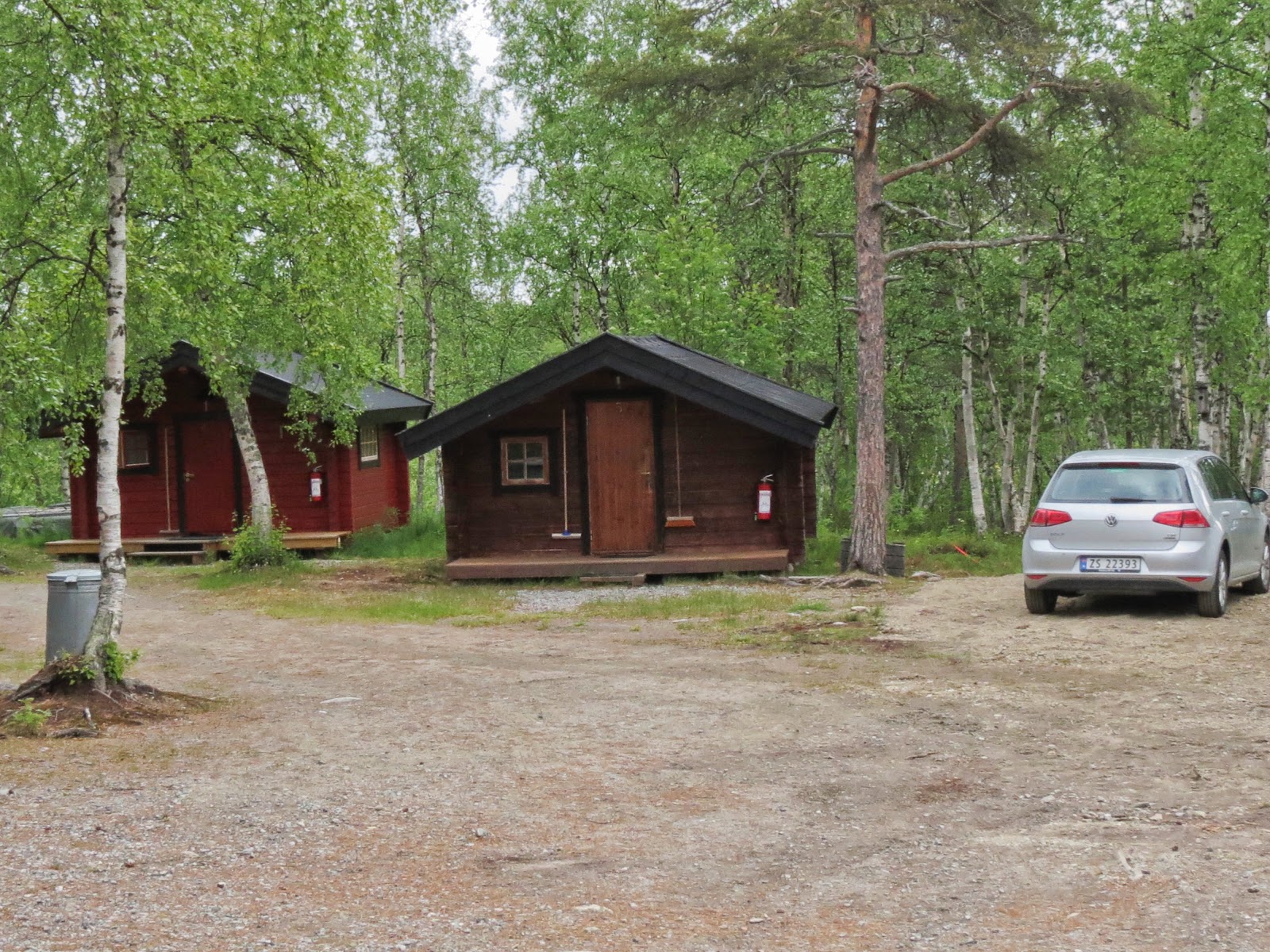 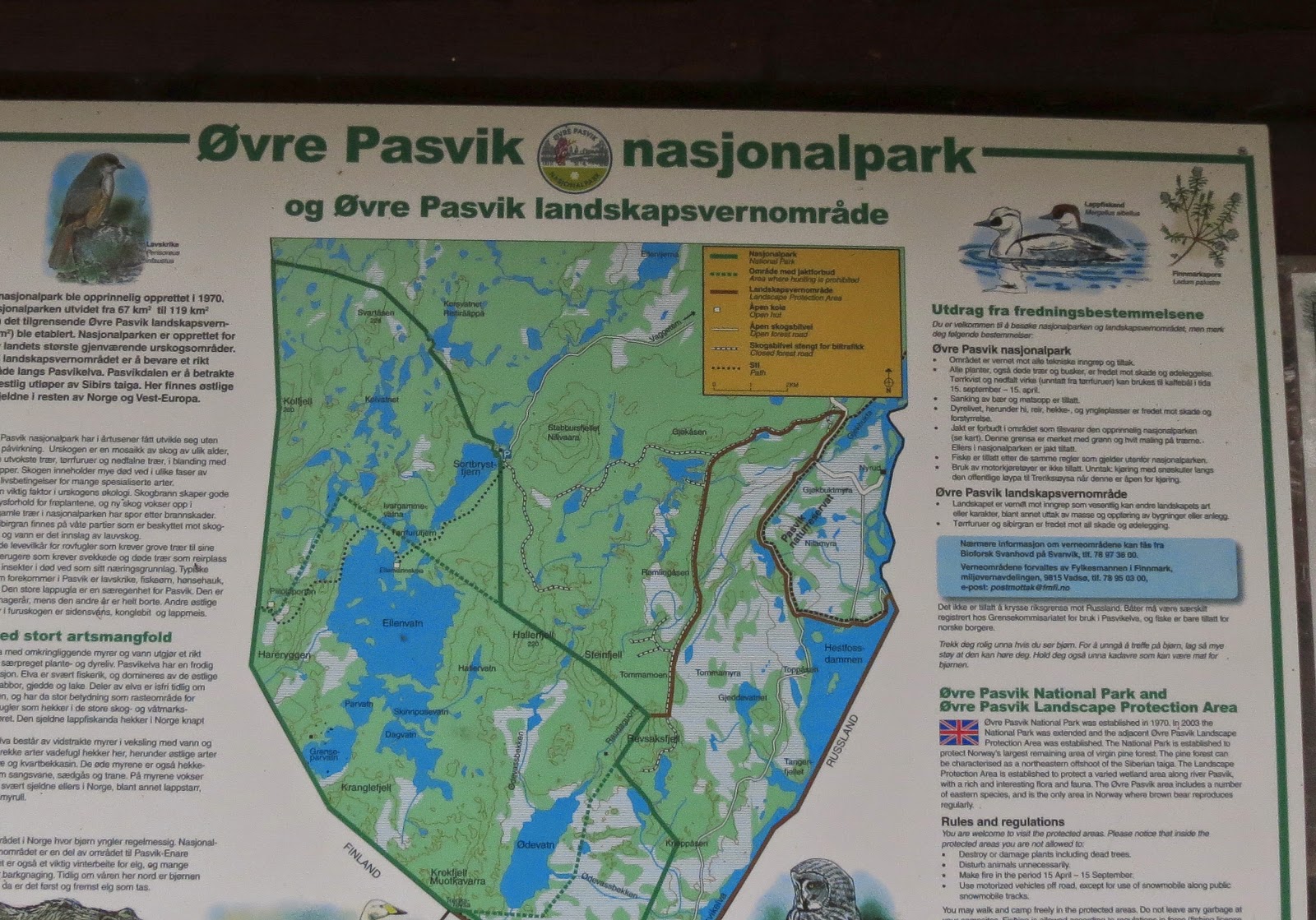 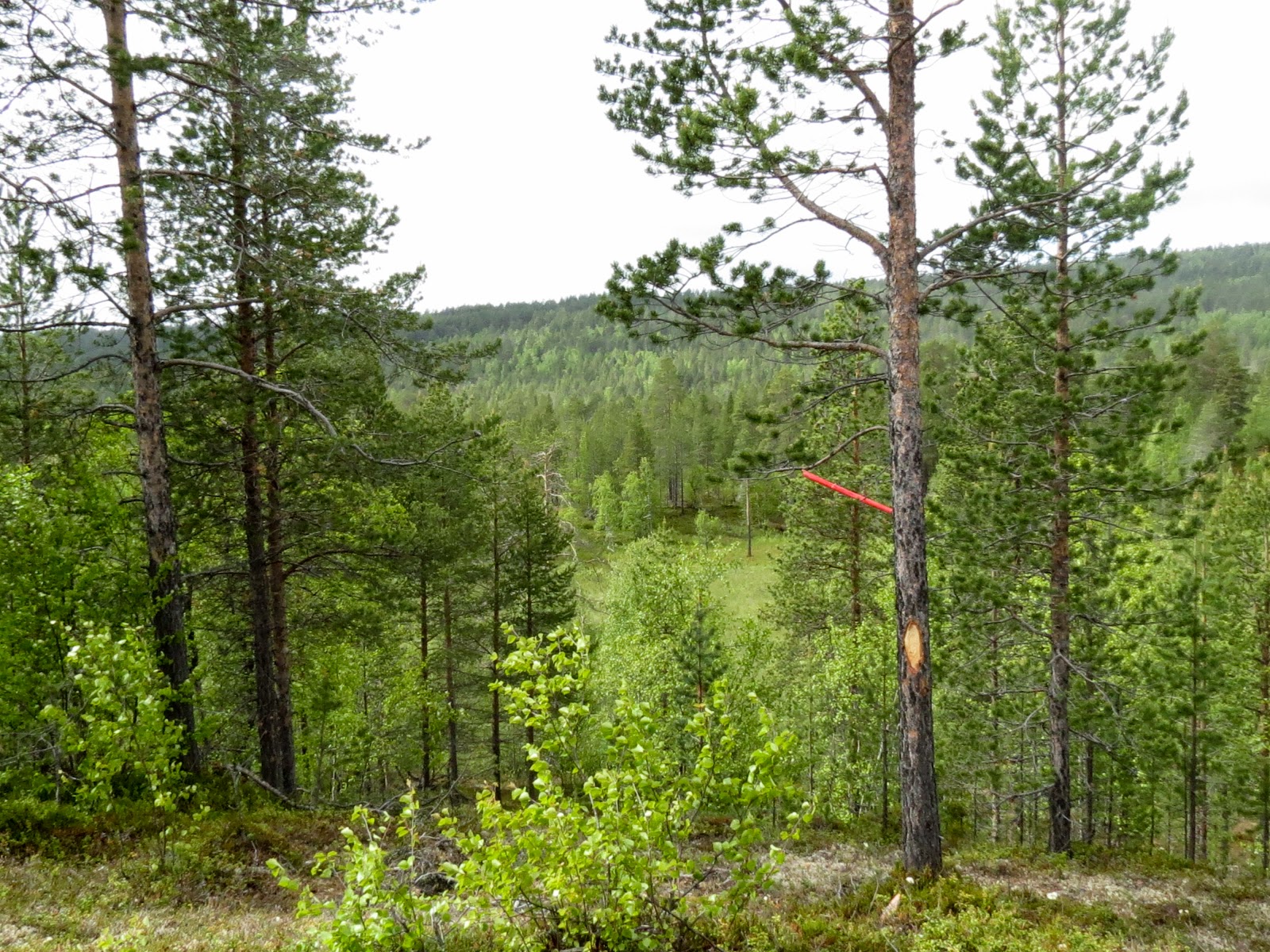 Another Hawk Owl seen regularly at the Cabin camp site along and flying over the Lake, also Willow Tit, Redstart around the cabin, and several Waxing. The Forest is separated with several tracks that are drivable in cars and regular stops can produce excellent birds

Day Six
Would have to say the most commonest bird seen in this area was Brambling, all too often we thought we may have been onto something different, turned out to be the usual suspect. 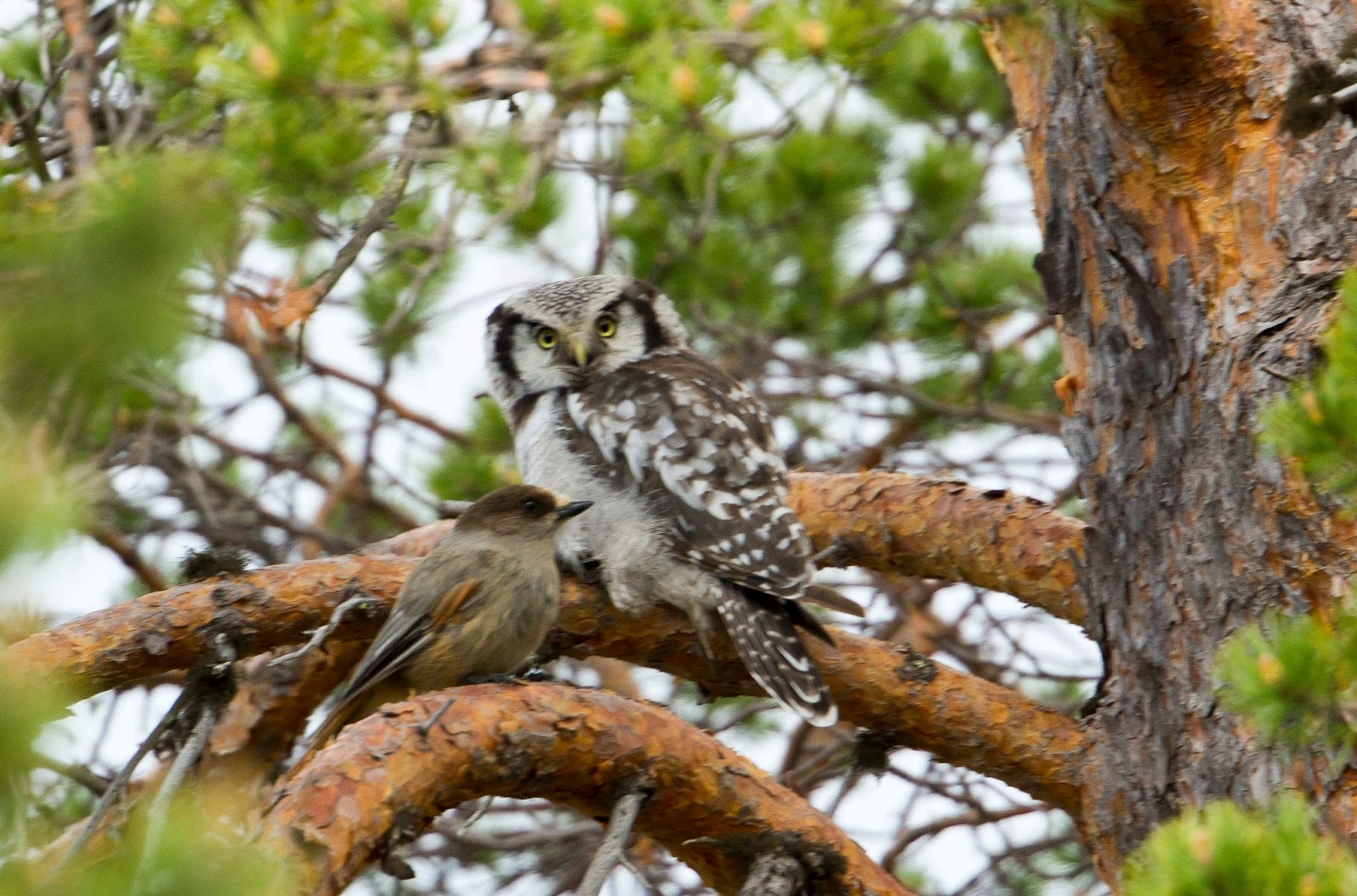 Although not a lot of new birds on offer, nevertheless the quality is first class. You can spend a lot of time chasing other people's birds or do your own birding, as this is a great place to find your own birds with not a lot of birders around. Perhaps not a big species list on offer but the quality is first class. Very friendly people easy to get around, with the roads being fairly quite one minute but each trial checked could be rewarded with good birds.

Day Seven
Good numbers of Little Gull and Smew on the lake at Skroytnes bird towers but distant. On the last morning spent a lot of time with no joy looking for the reported Great Grey Owl at Noatun Nyrod police station, but did have good views of a party of Siberian Tit and more Siberian Jay's. Also heard reports of sightings of Brown Bear whilst we were there but we had no such luck.

Quite strange looking across a lake at its narrowest point seeing sentry posts and large platform towers and discovering that is Russia. The end of the lake held borders separating Finland, Russia and Norway. 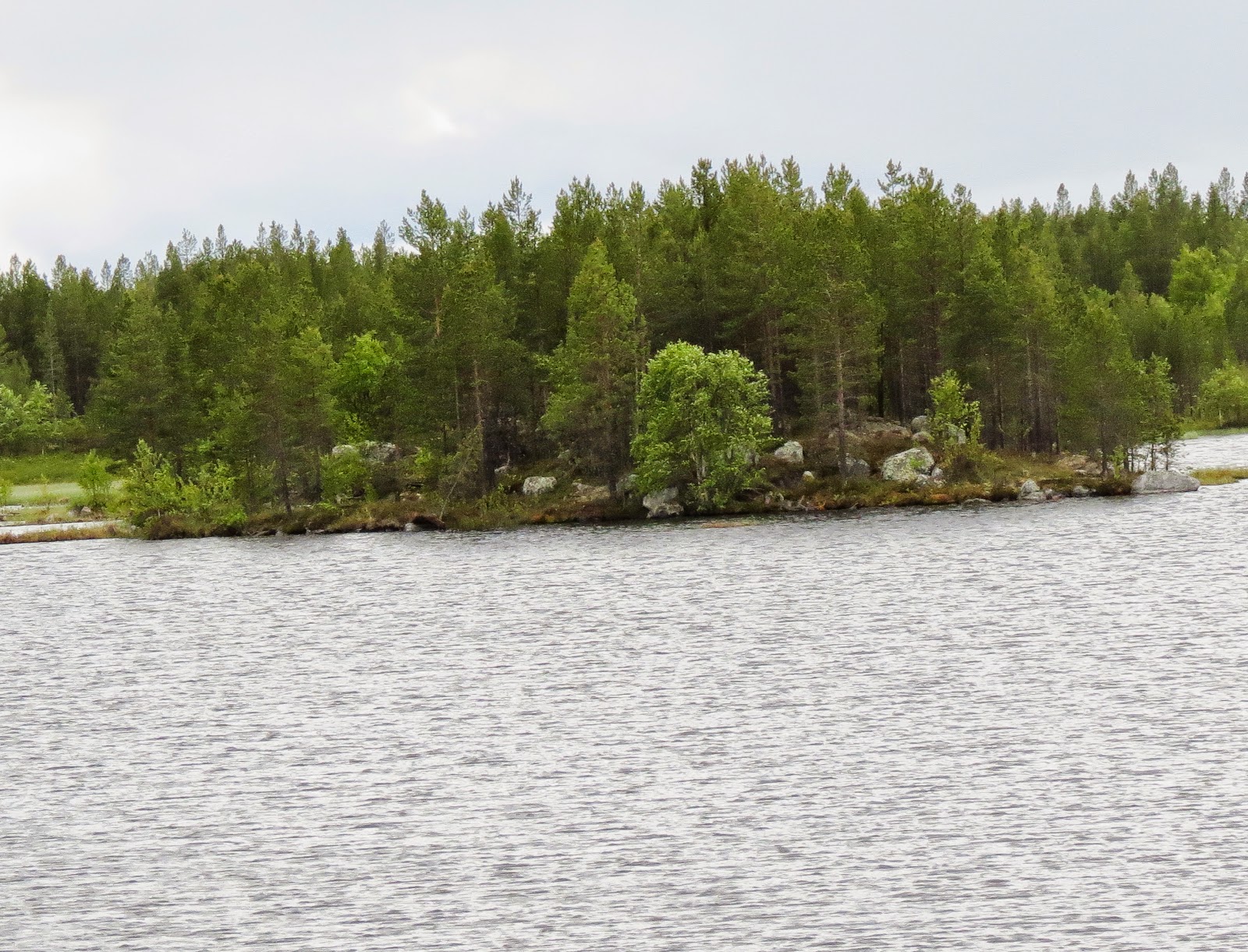 Sparadic showers most days with some sunny intervals, few of those days the rain turned into snow, which is very weird in June.Very quiet on the roads, in which would have been the start of there summer season. 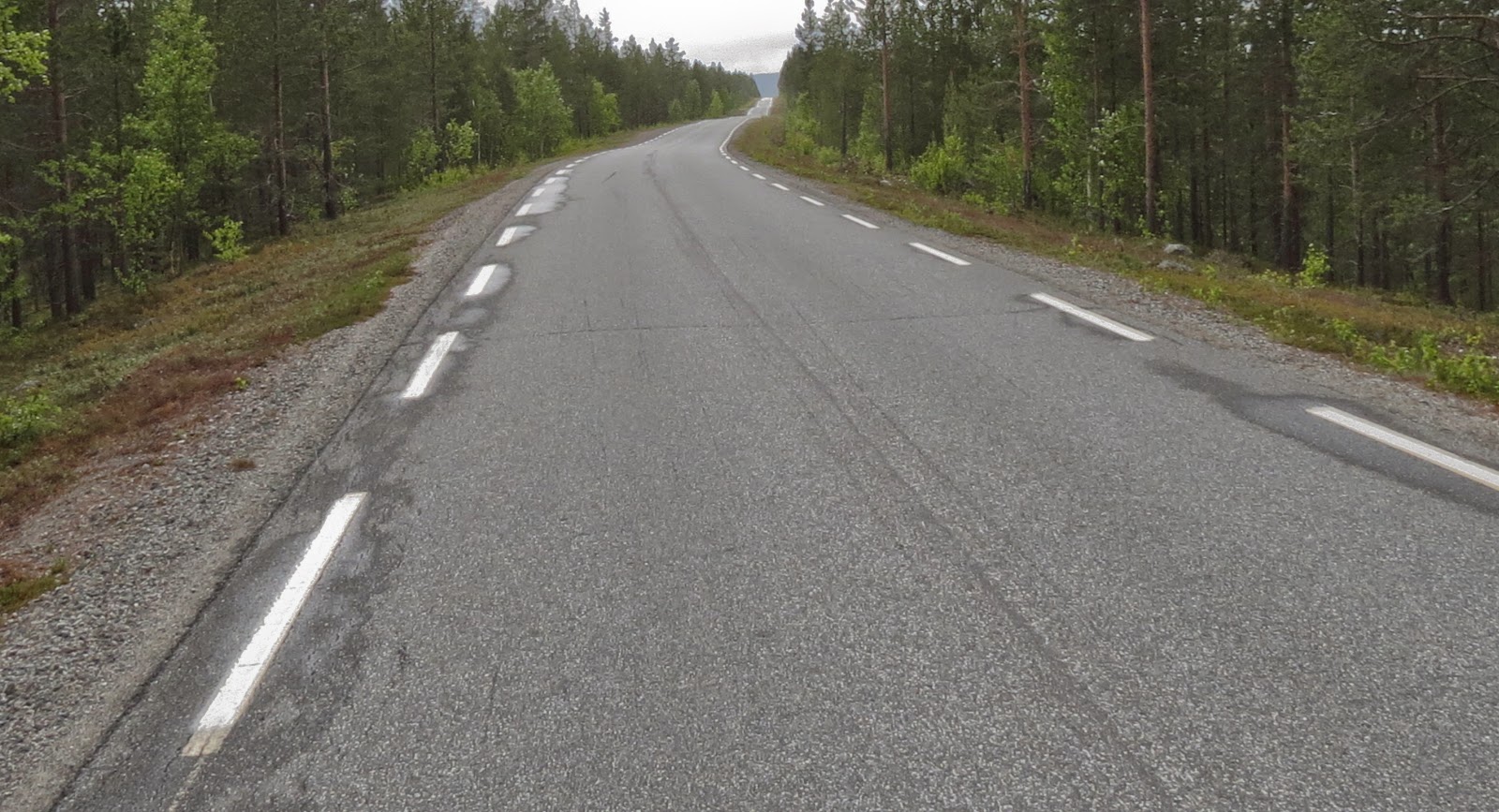 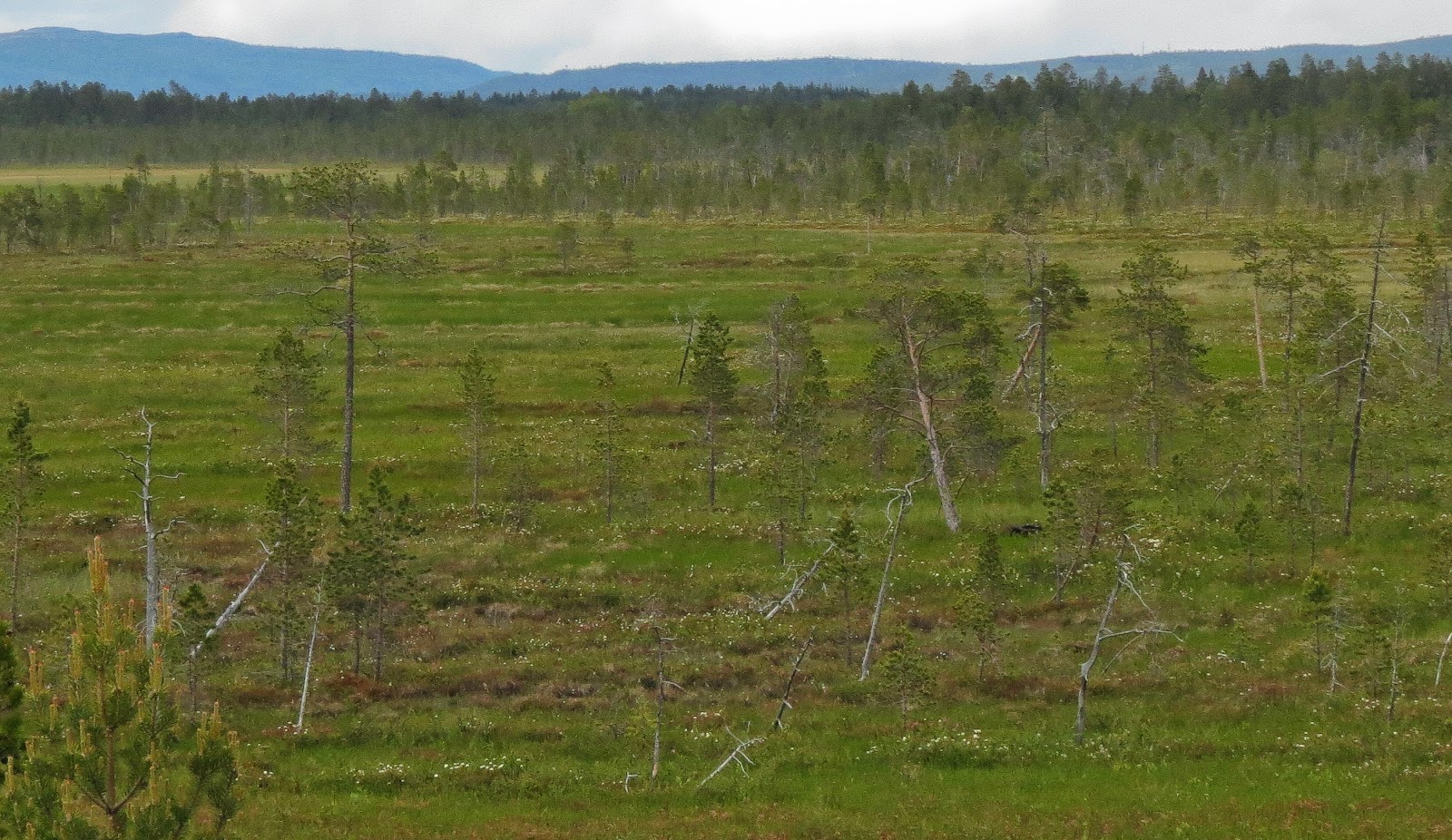 Book used: A Birdwatcher's Guide to Norway: Where, When and How to find the Birds of Norway including Svalbard ISBN-13: 9788299806244, very good although a bit pricey in my opinion and the maps are not altogether accurate.

Also followed Finnmark birding on Twitter, which gave us some free news but usually a day old.