Not unexpectedly quiet this morning, with Lesser BB Gulls on the river mouth arm, a Fulmar flew west over west beach and a Curlew west over the Marina. 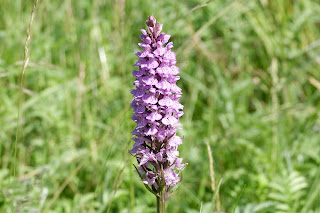 Elmer Rocks: Today’s local patch highlight (and year tick) was three Canada Geese – actually quite a scarce species here - flying W along the beach before heading N inland. Eight Sanderlings were also feeding along the shoreline, but the sea was predictably very quiet otherwise with just a few Sandwich Terns and Med Gulls seen. On the beach a family of Carrion Crows including two recently fledged young were present, a Little Egret went east and a couple of Swallows were overhead.
Elmer fields: A look at the fields behind Poole Place produced a Grey Wagtail feeding around the edge of a large puddle, two Swifts high up and a pair of Buzzards. The now-resident Whitethroats were largely silent, giving just the odd brief snatch of song, but a Blackcap, a Chiffchaff and two Song Thrushes were more obvious and still singing loudly. Two Great Spotted and a single Green Woodpecker were the best of the rest. (OM)
at 18:18

An adult Brent Goose and 15 Sanderling Elmer Beach, with a Hobby seen north west. (OM)
at 18:58

Three Little Tern on West Beach this morning the only birds of note. 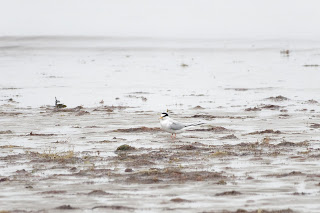 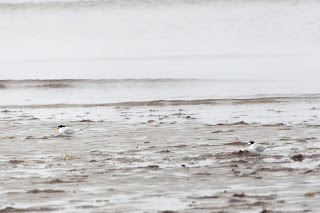 A fine bright sunny morning found 2 Grey Partridge on the golf course, a Spotted Flycatcher in 1st wood, and a calling Little-ringed Plover over west beach and 2 Wheatear climping beach(RG).  Also 36 Sanderling,(AH) and 2 Yellowhammer in the area.

Elmer Rocks - Poole Place (OM)
A little more happening today, including a Bonxie offshore which showed fairly well for a while before drifting W. A Whimbrel dropped in briefly on the rocks before also heading W and a single Sanderling did likewise after first dropping onto the beach. Also logged were a couple of Gannets offshore and a Fulmar, 9 Common Scoters and 6 Sandwich Terns all W. The pair of Ringed Plovers was also present, with the female still sitting.
at 18:17

Very quiet around the patch this morning with only singles of Corn Bunting and Whinchat being of note around the setaside. MB
at 14:06


A Spotted Flycatcher Climping Car Park on the 10th May and a Cuckoo heard from Long Wood on this date.