A guided trip with Birdfinders, didn't go exactly as planned because the original local guide was replaced at the last minute.  Although the replacement was a generally nice chap his birding skills and up to date knowledge of some of the targets and itinerary was not as it should have been. The group were left pretty much to there own devises and so a few targets were missed, as of this moment the group are still waiting for a reply from Vaughn Ashby. The flight departed from London Gatwick with a few hours stopover at Istanbul, then onward to Almaty.

The weather was generally very good and only one afternoon was disrupted by heavy rain and hail stones, which had everybody retreating back to the van for a short period.

After everyone clearing customs and being reacquainted with there luggage it was off to Almaty for the first two nights of the tour. Staying at the Kazakhchka Hotel, we checked in had a late breakfast.


Before departing for the first leg of the tour the  guide informed us that the rear garden's held breeding Azure Tit. A very nice start and a nice Garden tick.

We headed off to an area known locally as the Kaskelen Vilty NP, although the gps on my camera shows the location as Qarasay Audani.

Various stops along the way on our way out to the Taukum desert camp, the weather again very good although a tad windy at the magic tree site in the afternoon.


The next stop for lunch was around the Yle Audani


Another stop at area called locally as the Magic Tree, unfortunately very windy with sand blowing into to your face and lens whilst trying to take some pictures. I would have loved to visit this site in better conditions, seem to be various species moving through the area with the so called Magic Tree being the only Tree in the area.

Highlight of the day was a distant Demoiselle Crane, a couple of White-headed Duck, good numbers of both Calandra and Greater Short-toed Lark.

Obviously being out in the desert all mod cons are a distant memory, bed was a bit stiff but hey what a view to wake up to with the toilet block on the left. Target bird of the morning was Macqueen's Bustard that was eventually found distantly. The  frustration started to boil after hearing  that another group had seen  White-winged Lark in this area this morning.


Stopping off again at various sites along the way that added to the species tally.


The afternoon spent at Moyinqum Audanui, would be worthy of a prolonged visit with several Terek Sandpiper present, and good numbers of Collard Pratincole.


An evening stroll not far from the camp produced good numbers of both Calandra and Bimaculated Lark and Greater Sandplover at the watering hole.

Still a good variety with new species around the camp


On the road again with more new species and a change of habitat, I personally missed a Scops Owl and some Yellow-eyed Pigeon, but compensation was restored when I found my own Saxaul Sparrow.

Not lavish but simple clean accommodation with pleasant host. Local shop in the area selling bottles of beer and for those that still smoke, packets of fags for a about £1 each. 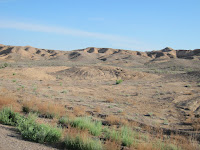 Landscape shot's above in an area called Enbekshyqazaq Audani, the target of the morning being Pallas's Sandgrouse, flight views obtained but not as regular or close enough for the chance of any pictures. Happy to get some record shot's of Desert Warbler.

The main target of the day was Ibisbill, with a pair meant to be breeding in the area around the reservoir. In my quest on seeing this iconic bird I nearly lost my camera after getting bogged down in some wet sand. Played my part in finding or flushing the bird when all were beginning on loosing all hope of seeing the this iconic bird.

This area in my opinion required more time, up near the Russian border  with varying habitat but little accommodation options, could easily spend a couple of days in the area. There is an old hostel but my understanding is that it wasn't being used and needs modernisation but you are right in amongst some splendid habitat. Heavy rain shower this morning but bird activity increased after it stopped and bagged one of my sought after targets, that being the White-browed Tit Warbler but still only managed an arsed end shot as it flew into cover.


In conclusion missing a few targets is never nice to swallow and  I would have booked  the extension to  Uzbekistan if the dates hadn't have been changed in the last month. My personal opinion is that Birdfinfers were offered a private tour late on and moved the initial guide onto the private tour. In hindsight I would have more liked time giving yourself a bit longer at each site, with such good birding and quality birds.

No complaints about the food, but could be difficult if you don't like stew. Meat and veg most nights with a starter as a salad. The vegetarian options looked very limited with salads or eggs. Breakfast consisted of Rice pudding or Eggs. Packed lunches assortment of sandwiches and snacks

I found the country a fascinating place, never felt threatened at anytime and would have no qualms about visiting again.
Home
Subscribe to: Posts (Atom)